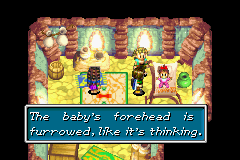 Ahri is a baby girl belonging to a family in Contigo. She has the ability to project Jupiter Psynergy to a small degree and that is similar to Whirlwind (unlike her older brother in the house); whenever she is interacted with in The Lost Age in her crib, she furrows her forehead as though she is thinking, and a draft is caused to blow through the room. The mother claims that "the power of the Anemos is all but gone in Contigo. However, it sometimes happens that a newborn suddenly shows power over the wind." Nonetheless, the family appears unaware that it is Ahri that is causing the constant drafts in the house, and believe it is merely the house itself that is shabby and in need of repair.

For being an NPC with a name and the abilities of an Adept, Ahri was often speculated by the fanbase to be a potential playable character in a new Golden Sun game that would take place many years down the line. Ahri does not make an appearance of any sort in Golden Sun: Dark Dawn.

Retrieved from "https://goldensun.fandom.com/wiki/Ahri?oldid=34217"
Community content is available under CC-BY-SA unless otherwise noted.