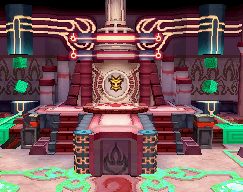 An Alchemy Machine is an ancient device that performs various feats using the principles of Alchemy. Alchemy Machines first appeared in Golden Sun: Dark Dawn, with all known machines being located in Angara.

Alchemy Machines were produced jointly in ancient times, through the efforts of the Jenei, ancestors of the Adepts, and the Exathi, a race of skilled craftsmen who resided in Angara. While all machines require Psynergy to run, most require an additional object, such as the Alchemy Forge's Sol Mask, in order to be properly controlled. It is theorized that this was the Jenei's way of ensuring that only they or their Exathi allies could use the Machines. Once Alchemy was sealed away, these machines became inactive. However, all the known Machines would be activated in the years following the return of Alchemy.

The Alchemy Machines differ in purpose. However, many machines can be controlled via the application of certain Psynergies. The Alchemy Forge of Passaj must be awakened by Mars Psynergy, specifically Fireball. Once united with the Sol Mask, it powers huge walls to form a protective fortress around the town. However, the Forge's main purpose is to produce a cloud passageway from Passaj to Craggy Peak, by melting down Zol. For the clouds to form properly, the Cold Snap Psynergy must be used to throw the machine into reverse. Meanwhile the Alchemy Well of Ayuthay, was awakened by Mercury Psynergy, and requires the Luna Mask for proper use. When activated, it provides water to the otherwise barren desert of Ayuthay. When thrown into reverse via the Arid Heat Psynergy, the water level will drop, allowing access to Barai Temple. Furthermore, the two machines can work in tandem, both to provide water to the Ei-Jei region.

Another machine, the Alchemy Dynamo was sealed away in an attempt to ensure it was never used. In theory, the Alchemy Dynamo was designed by the ancients to grant them access to the fundamentals of light and darkness. In practice however, the Alchemy Dynamo unseals Luna Tower, which, when awakened, causes the Grave Eclipse. The Grave Eclipse causes the Sun's light to be absorbed by the Tower, casting a shadow over a large region. This can allow numerous monsters to appear, causing vast destruction However, the Apollo Lens would be created as a countermeasure to the Tower. Powered by the Alchemy Well and the Alchemy Forge, the Apollo Lens collects and concentrates light into a powerful beam. When fired at Luna Tower, the Tower is forced to shut down prematurely, ending any negative effects caused by the Tower's activation.