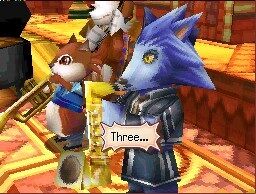 The Arangoa Prelude is a piece of music in Golden Sun: Dark Dawn. Vande's band in Belinsk is the only band known to play it, but will only play it once all 6 band members are gathered. It's Encyclopedia entry is as follows:

This ancient musical incantation has no sheet music - each of the six parts is given by a master musician to one apprentice. While it is extremely demanding to play, properly performed the piece is said to cause miracles.

Arangoa Prelude is an ancient piece of music that is stated to have no sheet music. Instead, the music is passed down from master to apprentice, and requires a total of six people in order for it to be played properly. According to popular legend, miracles happen whenever the song is performed. Currently, the Minstrel Band of Belinsk is the only known group with the ability to perform Arangoa Prelude.

Arangoa Prelude is first mentioned by Sveta, who promises that she will meet Matthew when this song is played as a signal. Matthew's party travels to Belinsk, but finds that they cannot request the song as three of the bandmembers are traveling. As Matthew's party travels through Morgal, they encounter the three musicians. Two agree to return to Belinsk immediately after being encountered. The leader, Vande, however, does not return until after Matthew's party defeats the Mountain Roc, as Vande had dreamed of hearing its cry.

Once in Belinsk, Matthew's party requests Arangoa Prelude, exciting the townspeople who are preparing for a festival. As soon as the song begins, every non-Adept in the area is mesmerized. Meanwhile, a secret entrance into the the Belinsk Ruins suddenly appears. Sveta then telepathically contacts Matthew's party. She explains the conversation and the mesmerized citizens to be due to the effects of Arangoa Prelude. She instructs the Adepts to enter the dungeon through the entrance immediately, as it is only open during Arangoa Prelude's playing.

After Luna Tower suddenly appears, most of the citizens believe the Tower's appearance to be due to the song. After the resulting Grave Eclipse ends, Sveta, now Queen of Morgal, bans the playing of the song, in order to permanently close off the ruins.