Astral Blast and Thunder Mine

Astral Blast and Thunder Mine are related Jupiter Psynergies featured throughout the Golden Sun series. They are functionally identical, but have different levels of power.

Astral Blast and Thunder Mine are offensive, single-target Psynergies that are Attack-dependent, meaning characters with higher Attack ratings will deal more damage with these attacks. In addition, the caster's Jupiter Power and the target's Defense and Jupiter Resistance all factor into the damage dealt. 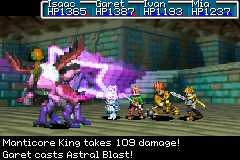 An "attack with celestial force," Astral Blast appears as a group of stars fired from the user, striking the foe at a distance. In the Page series, Astral Blast is usable by the Page, Illusionist and Enchanter classes; in the Apprentice series, it is usable by the Apprentice, Illusionist and Enchanter classes (note that the latter two classes are different from their counterparts in the Page series). Astral Blast is also usable in both versions of the Conjurer class in the first Golden Sun. Astral Blast isn't as strong as others like it, such as Heat Wave, but it does do its job well, especially against Venus-based enemies such as Tret. Astral Blast costs 5 PP to use and strikes the target with Jupiter power equal to the user's own attack power with 32 base Attack added. It is obtained at level 11. 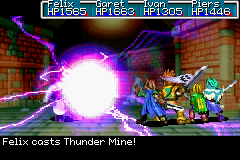 As with Psynergy like it, the more powerful Thunder Mine replaces Astral Blast after the wielder reaches the Conjurer class in The Lost Age. An "attack with ball lightning," Thunder Mine appears as a large ball of plasma-like energy with a heavy electrical charge slowly crashing into the foe. Unlike other, commonly used counterpart attacks, like Diamond Berg, Thunder Mine is supported by a large supply of PP. It costs 16 PP to use and strikes the target with Jupiter power equal to the user's own attack power with 85 base Attack added.

In Golden Sun and Golden Sun: The Lost Age, Astral Blast's visual effects feature a group of purple, five-pointed stars being fired from the caster, striking the targets at a distance. In Golden Sun: Dark Dawn, the caster fires three stars at the target, which hit the target from above. The first star is purple, while the second is blue, and the third is yellow.

Astral Blast's attack takes this base damage value and uses it in the following equation:

To word this in prose, Astral Blast and Thunder Mine take the base damage of the user's normal physical attack, add a set amount of bonus damage to that, and then this result is modified by how much higher or lower the user's Jupiter Power is than the target's Jupiter Resistance. The difference between the user's Jupiter Power and the target's Jupiter Resistance is divided by 400, then 1 is added to this, resulting in what can be called the "elemental damage multiplier". This number is what the Psynergies' damage is multiplied by.

Therefore, an Astral Blast cast under these circumstances would deal approximately 165 points of damage.

It should be noted that Thunder Mine is not introduced until Golden Sun: The Lost Age. In the original Golden Sun, even if Isaac, Garet, or Ivan reaches the Conjurer class, they will only be able to use Astral Blast.

General: Astral Blast's damage output is roughly the same as other elemental physical attack Psynergies like Heat Wave and Ragnarok. The Page and Apprentice classes are roughly equal in attack to the Squire class, and so any differences in power are due to Astral Blast's lower added damage. Astral Blast is roughly on-par with a mid-game weapon Unleash (with the main difference of costing Psynergy Points instead of activating at random) and is more valuable the earlier it is acquired. Even in the middle and late stages of a game, Astral Blast may be preferred over Unleashes due to its reliability. However, the player must change classes to use Astral Blast, so any benefits must be weighed against a change in Psynergy and overall statistics.

Thunder Mine, by comparison, may not be as practical as Astral Blast. Despite the increased damage output, Thunder Mine ranks solidly below such Psynergies like Liquifier and Odyssey, due to a lower added damage. Unlike those two, however, Thunder Mine is backed by a solid PP pool. Combined with its lower cost, Thunder Mine can be cast far more times than Odyssey. The main limitation would be that the Apprentice and Page classes are not often used in later gameplay, due to the superiority of the Samurai and Ninja classes.

Vs. Djinn: Many, though not all, offensive Djinn use a damage multiplier instead of a fixed damage increase, in addition to the "Power - Resistance" multiplier. As a result, these Djinn have the potential to be much stronger than Astral Blast and Thunder Mine, especially in the later stages of a game when the Adept in question has a higher Attack rating. However, unleashing Djinn in battle places them in Standby, resulting in two main disadvantages. First, Djinn must be Set to affect a character's class; unleashing a Djinni may result in lower stats across the board, including Attack and Power, reducing the damage dealt by subsequent attacks. Second, a Djinni's effect cannot be used again until that Djinni is re-Set, which means either wasting a turn manually Setting the Djinni or using it to perform a Summon, after which the Djinn used must spend several turns Recovering before they automatically Set themselves. Either way, offensive Djinn cannot be repeatedly used as easily as Psynergy, making Astral Blast and Thunder Mine more feasible for long-term combat. Alternatively, players may choose to combine both approaches: Unleash several offensive Djinn, perform a Summon, then use Astral Blast and/or Thunder Mine to continue dealing damage while the Djinn are in Recovery.

Golden Sun: Since Thunder Mine is not introduced until The Lost Age, players only have access to Astral Blast in the original Golden Sun, despite having access to the Conjurer class. Of course, considering Thunder Mine's higher PP cost, this may be a blessing in disguise. Regardless, Astral Blast is a particularly good option against Venus-aligned enemies. However, there are no bosses with a specific weakness to Jupiter, so there are fewer chances to take advantage of its power compared to Heat Wave or Ragnarok.

Golden Sun: The Lost Age: The inequality of early Djinn distribution means that the Apprentice class, and thus Astral Blast, are useful options for Felix, should the player wish to refrain from keeping Djinn in Standby. In this situation, Astral Blast can be useful against Briggs and the Aqua Hydra, as well as the Serpent should the player not have the Djinn needed to progress to a stronger class.

Despite three bosses possessing weaknesses to Jupiter, Thunder Mine is not commonly used, due to its inferiority to attacks like Death Plunge and Quick Strike.

Golden Sun: Dark Dawn: Astral Blast will usually become available while exploring Ei-Jei, but will likely be eschewed in favor of Ragnarok and Heat Wave. Depending on Djinn distribution, Astral Blast can be useful against Sludge and the Mountain Roc, both of which are vulnerable to Jupiter-based attacks. However, it can easily be ignored in favor of Death Leap should the player be able to access the Ninja class. Thunder Mine will see even less potential for use in comparison to previous games, due to the appearance of Sveta, a Jupiter Adept with better offensive options.