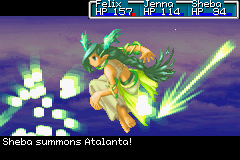 Atalanta was shown in a preview trailer at E3 '09 for Golden Sun: Dark Dawn. The summoning requirements remain the same as in the first two games.

In mythology, Atalanta was a skillful warrior with a bow and arrow. She took part in the hunt for the Calydonian Boar, an immense god-sent monster roaming the countryside. She was also famous for running and winning races against all suitors, only losing to Hippomenes when he placed three golden apples, given to him by Aphrodite, to distract her along the course. Atalanta is one of the few female heroes recorded in Greek texts.

Piece of animation from the GSDD Atalanta summon sequence
Community content is available under CC-BY-SA unless otherwise noted.
Advertisement