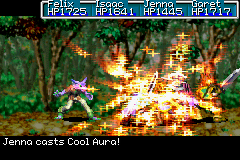 Aura, Healing Aura and Cool Aura are a series of Mars Support-class Psynergies featured in Golden Sun: The Lost Age. It is available to the Flame User class series meaning only Jenna can use it; however, she must be of the Hex class or higher to be able to use them.

Although outclassed by the Wish Psynergy series, Aura is very useful throughout the majority of Golden Sun: The Lost Age for players who choose to use the default classes as it is the only group healing spell available until Mia joins the party. However, a Flame User also has some powerful attack Psynergies and may spend more time fighting than healing, so players may be better suited to have an Adept in a class that has Wish available. However, it becomes immensely more useful should the player obtain gear that increases Jenna's Mars Power. A popular combination is the Big Bang Gloves and Ardagh Robe, which together effectively double the spell's power.