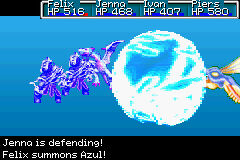 "An awakened dragon from the deep."

Azul is a Summon of the Mercury element found in Golden Sun: The Lost Age and Golden Sun: Dark Dawn. It is one of 14 summons that is not instantly accessible when the required Djinn are accessible, but must instead be specifically acquired by encountering a stone tablet that contains the summon. Like Daedalus, Catastrophe, and Iris, Azul's tablet can only be encountered by defeating a unique boss in battle. Azul is the strongest Mercury-aligned summon, and thus is considered to be one of the ultimate summons in both games.

After acquiring the Azul summon, a successful summoning of Azul requires that the player have 4 Mercury Djinn and 3 Venus Djinn on standby. Azul has a base Mercury power of 330 and also does additional damage equivalent to 21% of the enemy’s maximum HP. In addition, each enemy affected may be Stunned. Following the summoning, the Mercury Power and Venus Power of the summoner will increase by 100 points and 60 points, respectively.

In The Lost Age, Azul's summon sequence features a very lengthy blue sea serpent that encases the opposition in a big 3D sphere of Mercury energy. The sea serpent will then crash into the sphere from below into the top of the screen. In Dark Dawn, Azul is featured rising out of the sea from a water spout. The sea serpent will gather energy from within itself, then fire that energy as a water sphere that envelops the enemies. Azul will then crash into the sphere as in The Lost Age.

Azul is among Daedalus, Catastrophe, Charon, and Iris as “ultimate” Summons in the Lost Age. Azul is the game’s strongest Mercury-based attack; stronger than the popular Boreas summon. The somewhat hefty Djinn requirement, however, causes players to use Azul mostly in boss fights, rather than in random monster battles, though Azul proves extremely effective against Wonder Birds at Islet Cave in The Lost Age. And in the few boss fights that remain in The Lost Age after when Azul can first be acquired, Azul can be hugely effective, dealing massive damage to Valukar, Sentinel, the Flame Dragons, and the Doom Dragon itself.

Azul is modeled after the Leviathan described in the Old Testament of the Bible. The name "Leviathan" is used five times in the Bible, particularly in the Book of Job where the description in chapter 41 causes many to interpret it as a massive sea serpent, which lead to its popular modern-day image. This serpentine version of the entity makes many spiritual appearances in modern video games such as Square Enix's Final Fantasy series, and though its name in Golden Sun is different it is altogether likely this is yet another Leviathan appearance.