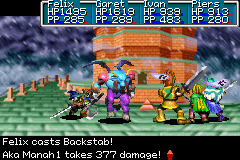 Backstab is a stand-alone Psynergy available only to the Punchinello and Acrobat classes. Because these classes are obtained through use of the Mysterious Card, any character can use the Backstab ability. Backstab is aligned with the Jupiter element, cost 16 PP to perform, and is learned at Level 29. It can only hit one foe at a time.

Backstab takes on the form of a normal attack, done from behind the enemy. In addition, a large cluster of stars fire out of the targeted opponent. Its in-game description is "Attack a foe from behind". Backstab does damage equal to the user's Attack stat plus 35 damage points added and then modified based on Jupiter power and resistances, and it also has the potential to kill the foe in one blow.