The battle system in the Golden Sun series is similar to that in other role-playing games. The player must use turn-based attacks to eliminate all opponents. Losing a battle (all characters' Hit Points being reduced to zero) causes a player to be transported back to the Sanctum he or she visited most recently. There is also a monetary penalty. Along with the battle graphics, the events of the battle will be relayed to the player in detail via text in the black box at the bottom of the screen.

Battle Commands are the options a player has when in battle.

These commands appear at the beginning of each turn; they determine what other commands or actions may then become available. All commands (other than Flee and the final action of the rightmost Adept), can be cancelled by pressing B.

Fight is the option to try and eliminate your opponent. It is the only primary command that leads to the secondary commands.

Switch is an option that only becomes available in Golden Sun: The Lost Age after you join up with the original party from Golden Sun. This option allows you to switch out one of your currently battling Adepts with an Adept in your "back row." After switching, you will be returned to the Primary commands (and will no longer be able to switch).

Flee is the option to try and "run away" in order to end the battle. You will not gain any Experience or coins from this. Also, it does not always work; You may try to flee and get the message "but there's no escape!" This will take up your entire turn; that is, if you fail, your characters will do nothing for a turn while your opponent attacks. You cannot flee in Battle Mode or from Boss battles; you simply get a message that says "This is no time to be running away!" and are returned to the Primary commands. Of note is that if your party "attacks first", then any attempt to flee will always be successful.

Status is the option that allows you to look at all of your Adepts' status conditions, statistics, and temporary bonuses to statistics. In a battle where classes change quickly (as is the case for most boss battles), this command is especially useful to keep track of your Adept's current statistics. You can switch between characters using the L and R buttons. After exiting this screen, you will be back at the Primary commands menu.

If you choose the Fight option, you will be taken to another menu that shows your leftmost Adept's options (the order can be arranged outside of battle by selecting status in the menu and using L or R, this only changes the input order though and does not effect who acts first, as that is determined by the Adept's Agility rating). Downed, stunned, or sleeping Adepts will be skipped.

The Attack command causes your Adept to physically attack an opponent, which you specify. It is possible for the opponent to "nimbly dodge the blow," and is much more likely if the attacking Adept is afflicted with delusion. It is also possible for your Adept to score a Critical Hit, which will do more damage and always hit. If your Adept is wielding an Artifact, it is possible for the weapon to "Unleash". This results in a special and unique attack that is aligned with an element and often does much more damage than a regular attack. In fact, using a certain combination of items, it is possible for one Adept to do over 1,000 damage almost every turn. Attacking costs nothing and can be performed even without a weapon and is based primarily on your Adept's Attack rating.

The Psynergy command allows you to choose a Psynergy spell which is in that Adept's arsenal. You can then target the focus of this spell. Psynergy spells you have enough Psynergy Points left to use will be shown in white, ones you do not have sufficient PP for will be shown in red, and if your character has a Psynergy Seal, all Psynergy will be unusable and shown in gray. Psynergy is influenced by the Adept's Elemental Power and the enemy's Resistance, which do not vary with level and thus will deal fairly constant damage throughout the game (the biggest influence will be the availability of Djinn).

The Djinn command allows you to unleash a Djinn which is currently set to that Adept, or set a Djinn that is on standby. Djinn in recovery are unusable, but you can see how many turns it will take for them to recover next to their name. When a Djinn is unleashed, your Adept will become weaker (how much depends on the specific configuration), and thus caution is advisable, especially if multi-element classes are utilised. Once unleashed, Djinn will go to standby, where they are red, and can be used to summon (below), however, if a standby Djinn is selected, it will return to set, giving the Adept back their stats and the ability to unleash the Djinn again (at the cost of preforming no other action for that turn). 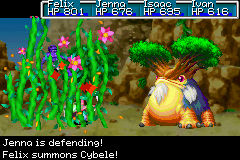 The Summon command appears only when your currently battling Adepts have Djinn on standby. It allows you to use a powerful Summon, many of which do massive damage and have other effects. The summons which you currently have enough Djinn on standby for are shown in white, and summons you do not have enough Djinn for will be shown in red. Interestingly enough, you can select a red summon to use; a message will simply come up on that character's turn saying he or she "doesn't have enough standby Djinn!" However, if you are very close to having the required number of Djinn for a particular summon, you can have a slower character perform it, and faster characters unleash necessary Djinn. This way, the faster characters will go first and set the summoner up. This is not necessarily recommended, as a problem with a faster character can cause you to waste a turn with the slower character as well; nonetheless, it can be an effective strategy. In Dark Dawn, this is no longer possible as you can only select Summons you have enough djinn for.

The Item command allows you to see the inventory of that Adept and select an item to consume or a piece of equipment to use. Unusable items will be shown in yellow, usable items in white, and broken items in red.

The Defend command causes that Adept to "defend" for a turn. To defend basically means the Adept will absolutely do nothing for a turn with the benefit of taking only 50% of the damage he or she would have taken otherwise for that turn, or even up to 99% of the damage, in case the defense stat has been temporarily been improved or buffed with the likes of the Djinn Flash and Iron.

It's also used as an automatic ability: If an Adept is set to attack, use some items on, or use a single target Psynergy on an enemy, and that enemy is felled before the Adept in question's turn, that Adept will automatically defend. In Dark Dawn, attacks are automatically redirected to the left-most enemy instead of automatically defending.

Defend is an interesting ability to mostly use if you wish to win some time for your other characters in danger, or wish some sort of automatic effect to occur safely (like curse performed via the Gasp Djinni, when you have weak characters and face very strong enemies - you cannot attack otherwise). That way, the ones in danger that protect themselves have a bigger chance to survive heavy hitting attacks or some battles they could normally, in some cases and depending on the player his abilities ... Not even win!

Obviously, there will be as many battle strategies as there are players.They can be roughly categorized in around 7 big groups, or a mixture of them and following the players their abilities:

- Item users: used by gamers of all levels to different extents.

- Pure attackers, using a specific ability or abilities of their weapon(s); mostly used by intermediate players.

- (100%) Summon rushers, both the normal as the combined ones, with subgroups of people using Summons that need a lower amount, a medium amount to a large number of djinn: used by beginners to early-intermediate players, because you do not need too much strategy perform it properly.

- Item-class dependent users (Punchinello, trainer and Dark Mage class): Beginners use it to try, more experienced ones use it as a way to broaden the variety of classes that can be used by one, or different members in the party with the cost of the need to use a lot of creativity to use all the characters their abilities optimally.

- Special attackers: Players, using a combo of special classes their Psynergies, like Ronin to use a Quick Strike (Attack dependent), while healing their characters with a Coatlieue Summon (Summon Rusher, medium amount Group) and buff those attacks with the right equipment(s). Most of the players that use it well to very well, use this technique in conjunction with low to medium Summons, pure attacking, precise item usage and even item-class dependent classes.

Those type of players mostly have an above-intermediate level to even being very experienced, due to all class and stat changes that need to be put into account !