Bind is a Jupiter-based support Psynergy featured throughout the Golden Sun series.

Bind is a status-altering move that affects a single target. 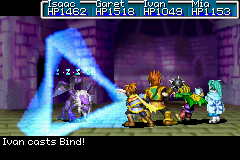 In Golden Sun and Golden Sun: The Lost Age, Bind appears visually a triangle of rapidly-shifting coloration spins and locks on to the target, becoming an intricate seal. In Golden Sun: Dark Dawn, a group of multicolored concentric circles focuses on a target, with an intricate purple seal forming over the head of the target.

Bind is a status-altering move that inflicts the Seal status. After a successful cast of Bind, the target will be unable to perform Psynergy spells for a limited duration of time, usually lasting four to five turns at the most. Bind's success is dependent on the Luck of the target; a target with lower Luck is more likely to be inflicted with Seal than a target with high Luck. Bind's effect can be reversed via the Restore Psynergy or by using the items Elixir or Dried Lizard. Otherwise, the effect wears off within a few turns or when the battle is ended.

Bind can be a useful status-altering move in certain situations, but has many drawbacks that should be taken into consideration. First, Bind's effect does Bind is useful against enemies that are Psynergy-dependent, as a successful cast can temporarily halt their main source of attack. However, its dependence on the Luck of the target means it will rarely hit bosses. While Bind can easily affect common enemies, its practicality is limited since most common enemies are dependent on basic Attacks and enemy abilities, which remain unaffected by Bind.

Should the player desire to have Bind's effects, more reliable options lie in the Djinn Rime and Luff, which are capable of sealing Psynergy without fail.