Blast, Mad Blast, and Fiery Blast are a series of Mars Psynergy featured throughout the Golden Sun series. 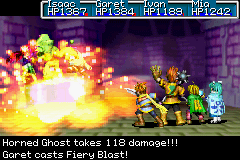 Blast, Mad Blast, and Fiery Blast are offensive, ranged Psynergies. The total amount of damage is determined by comparing the user's Mars Power to the target's Mars Resistance and using this value to modify the base power of the particular Psynergy.

Blast: "Attack with an explosive blast.": This costs 5 Psynergy Points, has a base power of 25, and has a range of three targets. A small explosion of fire occurs at the feet of the enemy party. It is available at level 2.

Mad Blast: "Attack with an explosive blast.": This costs 9 Psynergy Points, has a base power of 50, and has a range of three targets. A moderately large explosion of fire occurs at the enemy party's position. It is available at level 10.

Fiery Blast: "Attack with an explosive blast.": This costs 19 Psynergy Points, has a base power of 110, and has a range of five targets. A large explosion of fire, spreading many embers, occurs at the enemy party's position. It is available at level 28 for the Swordsman class series and at level 27 for the Dragoon class series.

Visually, each stage of the Blast series features a fiery mass exploding under the feet of the enemies, sending them flying upwards for a short distance. The explosion becomes larger with each successive stage.

Elemental Power attacks such as Blast, Mad Blast, and Fiery Blast use a set base power as the base damage to be modified. For example, the base power of Fiery Blast is 110. Thus an unmodified Fiery Blast would do around 110 points of damage.

Fiery Blast's attack takes this base damage value and uses it in the following equation:

For example, if an Adept with a Mars Power of 150 casts Fiery Blast on a monster with a Mars Resistance of 50:

Therefore, a Fiery Blast cast under these circumstances would deal approximately 165 points of damage to the targeted enemy. Since Fiery Blast is a ranged Psynergy, adjacent targets take a percentage of the total damage, with the percentage decreasing as distance from the main target increases.

The Blast series is available to the Swordsman class series and Dragoon class series. Thus, all Venus, Mars, and Mercury Adepts are capable of learning the series. Mercury Adepts typically require large amounts of Mars Djinn to access the series. Despite the series being Mars-oriented, however, Mars need large numbers of Mercury Djinn to access the series. Venus Adepts need a combination of Mars and Mercury Djinn. Blast is available at level 2, while Mad Blast is learned at Level 10. The Swordsman class learns Fiery Blast at Level 28 while the Dragoon learns it at Level 27.

General: The Blast series is typically a midgame series, characterized by its early availability but weaker power overall. Despite its weakness, it is the only Mars-based Psynergy available to its classes, and in fact, the only ranged Psynergy available to the Swordsman. Its low cost means that it can be used repeatedly, something that may happen often due to the low power.

Golden Sun: Garet may sometimes be placed in the Swordsman class around Mercury Lighthouse, in preparation for the battle with Saturos. While Cutting Edge is usually more popular due to its effectiveness on Saturos, Mad Blast can be useful for taking out the numerous Mercury-oriented monsters. Fiery Blast is normally available to an endgame party, and can be useful against Mars-weak enemies.

Golden Sun: The Lost Age: While the Swordsman is available early on, Jenna typically has better Mars Psynergies available to her in her base class. For most of the game, Blast would only see use if the player is trying to deal with an imbalance of Djinn. The series will be used more as part of the Dragoon class, since it is the only Mars-based class available. The weak power can be boosted to an extent by equipping Mars Power-increasing equipment like the Big Bang Gloves.

Golden Sun: Dark Dawn: The Swordsman class, and thus Blast, will see little use early on. The Dragoon class is an option for the two Mars Adepts during the end of the game, so Blast would be necessary in those situations.