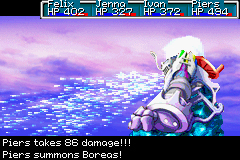 "The god of the north wind."

Boreas is a Summon sequence of the Mercury element. When four Djinn of the Mercury Element are on standby, the Boreas Summon sequence can be activated. It resembles a giant mechanical entity which is as big as a mountain. Boreas initially appears embedded into an icy mountain top before breaking free from the ice covering him. A boulder of ice falls on top of its back, which it appears to grind up into tiny fragments of ice like a gigantic ice shaver, and sprays the opposing party with the freezing fragments (which are actually big when compared to the size of Boreas), engulfing them in deep frost such they appear as a giant ice block. Boreas then fires an icy spear at the ice block, which shatters the frozen foes and heavily damages the enemies trapped inside.

Boreas has a base Mercury power of 240 and also does additional damage equivalent to 12% of the enemy’s maximum HP. Boreas is the most useful Mercury summon sequence and one of the most widely used. It is twice as powerful as Neptune and four times as powerful as Nereid and uses only 2 times the amount of Djinn on standby as Nereid does. It can be very effective against many bosses in both games, particularly the Fusion Dragon.

The trailer for Golden Sun: Dark Dawn broadcast at E3 2010 revealed Boreas to be one of the game's summon sequences, and its identity was confirmed in a later Amazon.com trailer for the North American release. Boreas has received a redesign: while now appearing as an enormous mechanical horse/unicorn-like entity with powers over ice, it now appears riding attached upon the front car of a steam locomotive that barrels through a snowy mountain trail, and it slams down its two enormous mechanical hooves onto the ground in front of it to project a massive wave of cold energy that reaches the enemy group.

Boreas in Greek mythology was one of the four chief Anemoi (the Greek wind spirits, also the name of a tribe in Golden Sun). Boreas was the north wind and the bringer of cold winter air. He was known to be very strong with a violent temper to match. He was also frequently depicted as an old man with wings and a beard whilist holding a conch shell and wearing a billowing cloak. It is possible that its new equine-like design stems from some myths in which Boreas, as a wind-formed stallion, sires the fabulous Immortal horses of the Kings of Troy from King Erichthonios's mares.