Break is a Mercury Support Psynergy featured throughout the Golden Sun series. 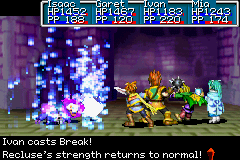 Break is a non-offensive Psynergy that will affect all enemy targets.

Visually, Break appears as a burst of blue energy, akin to a water splash, rising from the feet of the target.

Break is a unique support Psynergy, in that it removes the statistical buffs of an opponent. Break's chances of success are unaffected by the stats of the user, and thus will never fail; the only exception to this rule is Sentinel, due to its natural immunity to all Psynergy. Break only affects Buffs and thus will not restore statistics that were lowered by an attack.

Break is one of the most widely available Psynergies, learned by a variety of classes, most being Mercury-influenced to some degree. Adepts of all elements are capable of using Break. All three-Mercury based mono-elemental classes, the Water Seer class series, Mariner class series, and Aqua Squire class series, have access to Break. Other class series' that can learn Break are:

The Ranger and Pilgrim series' learn Break at level 34, while the rest learn it at level 30. Interestingly, Break is not only learned by many Adept classes, but is also in the arsenal of many bosses, making it perhaps the most commonly learned Psynergy of all.

Break is a useful technique, due to its unique effect. Many bosses have moves that raise their statistics. While these buffs are temporary, the effect can be extended by recasting. Break can be used to eliminate these buffs, making a battle much easier. Break will see less use against common enemies, however, as they rarely augment their own stats. When used against the player, Break can be particularly annoying, as many bosses in Golden Sun and Golden Sun: The Lost Age will use it to remove the party's buffs, weakening them.