The Card Psynergy set is the collective name for a group of semi-related Psynergy attacks available to the Pierrot Class series. Each of them is a reference to the Mysterious Card, the item that puts an Adept in the Pierrot series. Unlike other Psynergy sets and series, which are linked by a common statistical feature and appearance, the Card set's members are only similar in name, with a vague visual resemblance to each other. The set is an interesting blend of non-damaging imitations of condition-inflicting Psynergy and completely original offensive attacks. The offensive Psynergy always has a range of 3, making it useful as enemies rarely come in groups of more than three, and there is only one damaging spell per element. 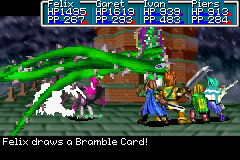 Learned at Level 3, the Jupiter-based Baffle Card is the simplest of the Card techniques. Hitting three targets at once, it does nothing more than try to put the Delusion condition on them; in effect, mimicking the Delude and Mist abilities. It appears as a gray card that appears before the foes, then envelops them in smoke. It costs 4 PP and is described as "Envelop foes in an illusion."

The Sword Card is the second of the Card abilities. It is a Mars Support Psynergy that mimics the Dull technique in effect (reducing a single enemy's Attack by 25%, with a 50% maximum) and is described as "Reduce a foe's attack." It is learned at Level 8, and costs 6 PP.

Flame Card is the first damaging Card power. It appears in the form of a red card that blasts a sheet of fire into its targets. It has a range of three, a Mars power of 60, and costs 11 PP. It is learned at Level 13 and is described as "throw a card of the flame suit." When it is first learned, it seems to be a decent and powerful Fire attack. However, after Level 18, Flare Storm is a more reasonable technique due to the fact that it has 20 more power and only costs 1 more PP.

Sleep Card is a non-damaging ability that mimics the more commonly used Sleep Psynergy. It appears as a purple card that forms above its targets before dropping a torrent of sheep in front of them. Excluding the card, the visuals for this attack are identical to the Sleep Psynergy. Sleep Card's description is "put a foe to sleep," it is learned at Level 15, hits three targets, and costs 5 PP.

Thunder Card is the second damaging technique in the series and is described as "throw a card of the thunder suit.". It takes on the form of a translucent, purple, energy-based card that lobs vast amounts of lightning into its targets. Thunder Card is learned at Level 25, has a Jupiter power of 100, and hits three enemies. It costs 17 PP to perform. This is essentially a cheaper Shine Plasma, as it has the same power but is offered at a lower level and has a lower cost.

The final non-damaging Card, Death Card is an imitation of Condemn in effect. It hits one target for 8 PP, and will either do nothing or kill them instantly. Death Card appears as a black card that summons the Grim Reaper, after which point the visuals become identical to Condemn's. It is learned at Level 27 and is described as "Call the Reaper to claim your foes."

Bramble Card returns to the damaging nature of the Flame and Thunder Cards, but in Venus form. It appears as a purple and green card that floats just in front of the opponents while huge thorny vines rush out and pierce all targeted enemies, and is described as "Throw a card of the Thorn suit." Bramble Card is learned at Level 33, hits three targets with 130 Venus power, and costs 22 PP. This is a slightly weaker version of the Nettle Psynergy in all respects. Because of its highly concentrated power and cost-effectiveness, this Psynergy may be worth leveling up to get and use in the battle against Moapa.

The only Mercury technique in the set, Frost Card is the final technique learned by the class series, at Level 46. Frost Card looks like a translucent blue card that fires a volley of crystalline ice into three opponents. It is described as "Throw a card of the Ice suit." Frost Card has a Mercury power of 175 and costs 28 PP. This is essentially a more powerful version of the Ice Missile Psynergy. Because this is the strongest damaging Psynergy of this class, the Mysterious Card would be effective on a Mercury spellcaster such as Mia. As an endgame Psynergy, it is ideal against endgame fire opponents such as the Flame Dragon monster line while being cost-effective.

As the Pierrot class is essentially composed almost completely of this series' Psynergy, the majority of the spells will see use at some point over the course of the game, and as mentioned above, the set balances damaging, condition-infliction and debuffing Psynergies of modest power. As there is an offensive psynergy for each element, the adept can always exploit an enemy's lower resistance. Because of a lack of single-target damaging attacks, however, the set should be utilized for softening up large opposing parties that share the same element.