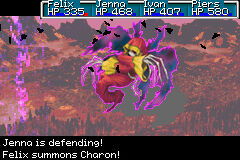 "The boatsman of the river Styx."

Charon is a Summon of the Venus element first appearing in Golden Sun: The Lost Age. It is one of fourteen summons that is not automatically acquired when the player has collected the necessary Djinn, but must be specifically acquired from a Stone Tablet. It is considered to be an "ultimate" summon, alongside Catastrophe, Daedalus, Azul, and Iris. It is also the second-most powerful summon, after Iris.

Before Charon can be summoned, it must first be acquired from a summon tablet. Unlike the other ultimate summons, there is no boss to be defeated. Instead, Charon is given as a freebie, with the intent of it being used as a weapon against Dullahan. In The Lost Age, Charon's summon tablet can be found in the first room of Anemos Inner Sanctum. Before the room can be accessed, however, the player must have obtained all 72 Djinn. In Dark Dawn, Charon's tablet is found in an interior room deep in Crossbone Isle. In order to gain access to the dungeon, the player must have beaten the final boss at least once. In addition, Charon's room requires that the Search Psynergy be used to reveal the entrance.

For a successful summoning of Charon, the player must have eight Venus Djinn and two Jupiter Djinn on standby. Once summoned, Charon has a base Venus power of 500 and also does additional damage equivalent to 30% of the enemy’s maximum HP. In addition, each enemy affected may automatically be KO’ed. Afterwards, the summoner's Venus Power will rise by 100 and the summoner's Jupiter Power will rise by 30 points.

In The Lost Age, Charon's summon sequence features a cloaked, skeletal entity, emerging from a giant dark seal in the landscape who summons a flood of black-purplish energy to engulf each victim individually, drowning them within its impure mass. In Dark Dawn, Charon appears as a more humanoid skeleton rowing with an oar. Charon starts out casting a flood of dark mud towards the opposition which quickly renders everything pitch-black and shatters to pieces.

Charon may be seen, along with Iris, as one of two “ultimate” Summons in The Lost Age and Dark Dawn. In both games, Charon is the strongest Venus-based summon, much stronger than the Judgment and Haures summons. The hefty and lopsided Djinn requirement most often causes players to use Charon mostly in boss fights, rather than in random monster battles. Unlike the other ultimate summons, it is given to the player essentially for free. Thus, a player can collect it as soon as access to its dungeon is given, meaning it could be acquired early on, and then used against the various superbosses. Due to its overall power, it is one of the best weapons against the supremely powerful and fearsome Dullahan at the end of that same dungeon. But beware; Dullahan can summon Charon as well.

Charon in Greek mythology was the ferryman of Hades. He would take the newly dead from one side of Acheron, the River of Death, to the other side, but only if the dead had a coin to pay the fare. However, later confusion over different rivers in Hades led the natures of the Acheron and the Styx, River of Unbreakable Oath, to be muddled and fused, hence the summon's description.