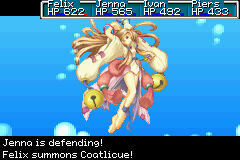 "A goddess bearing the water of life."

Coatlicue is a Summon of the Mercury element first appearing in Golden Sun: The Lost Age. It is one of 14 summons that is not automatically available once the player has attained the necessary Djinn, but must instead be specifically acquired from a stone tablet that contains the summon. It is notable for being the only summon in any game that is incapable of offensive damage.

Before Coatlicue can be summoned, the player must first acquire the summon from a Summon Tablet.

In The Lost Age, Coatlicue's Summon Tablet is found Atteka Cavern at the bottommost tip of Atteka. The cavern can only be reached with the Wings of Anemos attached to the Lemurian Ship, and the Parch Psynergy is required inside as well.

In Golden Sun: Dark Dawn, the tablet is found in Harun Channel, after passing through Warrior's Hill. To obtain it, use Crush on the rock blocking the water from flowing into Warrior's Hill, then leave. Re-enter the cave via Harun Channel and jump over the now-moved box to find the Summon Tablet.

To summon Coatlicue, the player must have 3 Mercury Djinn and 3 Jupiter Djinn on standby. Rather than inflict damage on the enemy, Coatlicue instead heals the player's actively battling party by a small amount on the initial turn it is summoned. Coatlicue's initial heal has a base power of 60. Additionally, during the next 5 turns, the each member of the actively battling party will be healed by a percentage of their total HP: by 60% the first turn, 50% the second turn, 40% the third, 30% the fourth, and 20% the fifth.

It resembles a goddess, in clothing featuring giant chimes, who summons water to float upward and bolster the Adepts. In Dark Dawn, Coatlicue is shown holding a large water jar, while sitting atop a high platform. Water begins streaming out of her jar, and falls off off the platform. A large energy field then appears below the party as they are healed.

Coatlicue is obviously very different from all other summons. It may actually be the most useful summon of all because of this. Thanks to the very potent effect of this spell, which is much like the classic Regen spells of Final Fantasy games, Coatlicue makes the party almost unkillable for five turns in a row because of how much their HP values regenerate. This can be useful in all boss fights that take place after the Reunion of Adepts; perhaps the best place to summon Coatlicue is in the later stages of the Doom Dragon final battle, whose titanically powerful Cruel Ruin attack brings most Adepts to a very low point in their remaining HP meters; a well-timed Coatlicue summon can automatically restore the Adepts without having to resort to Psynergy such as Pure Wish and Cool Aura in place of attacking.

The Golden Sun portrayal of Coatlicue is radically different in appearance from the original conception. Coatlicue was the Aztec goddess who gave birth to the stars, moon and Huitzilopochtli (the sun and war god). She was also known as the patron of women who died in childbirth, keeping the hands, hearts and skulls of the unborn children close to her own heart to purify them. Despite this matronly aspect and her epithet as "Mother Goddess of the Earth who gives birth to all celestial things", Coatlicue is depicted with claws and wearing a skirt of writhing snakes and a necklace made of human hearts, hands and skulls.

The key to this mystery lies in the Japanese version, where the summon's name is simply Coatli, which is a Nahuatl word meaning Water Serpent; a term applied to various Aztec healing medicines. In this sense, Coatli represents the healing power of these medicines, also associated with water. The bells on her sleeves could be a reference to her daughter Coyolxauhqui, whose name can either mean "golden bells" or "face painted with bells".

In Dark Dawn her appearance seems to also reference Aquarius, the Water-Bearer of Greek mythology.

Coatlicue reimagined in Dark Dawn.
Add a photo to this gallery
Retrieved from "https://goldensun.fandom.com/wiki/Coatlicue?oldid=43608"
Community content is available under CC-BY-SA unless otherwise noted.