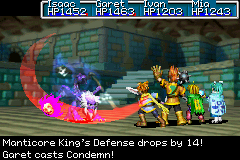 Condemn is a Venus-based support Psynergy found throughout the Golden Sun series.

Condemn is a single-target, non-offensive Psynergy. Its chance of working changes depending on the Luck statistic of the target(s).

Visually, Condemn features a traditional Grim Reaper figure that appears to slice the chosen target with its scythe.

Condemn is a status-altering Psynergy that may instantly inflict the Downed status on a target, regardless of current HP. Like all status-changing Psynergies, the rate of success is related to the Luck of the target. Lower Luck levels result in a higher rate of success.

Like most status-changing Psynergy, Condemn is excellent in theory, but falls short in practical usage. Due to its dependency on Luck, it rarely works on bosses, limiting its usefulness. Even against normal enemies, the success rate is so low that it is often more effective to just attack normally. Players will often find that the Psynergy will only be successful when it targets their own party, but even then it is so often unsuccessful that players may actually prefer getting targeted by this move, as it is akin to the enemy wasting a turn.

Should the player desire the chance to down an enemy in a more practical form, certain weapons and Djinn come with the side-effect of potentially downing a character while still doing damage when the side-effect is not triggered.

Retrieved from "https://goldensun.fandom.com/wiki/Condemn?oldid=41962"
Community content is available under CC-BY-SA unless otherwise noted.