Start a Wiki
Cool, Supercool, and Megacool are a series of offensive Mercury Psynergy introduced in Golden Sun: The Lost Age. 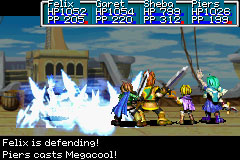 Cool, Supercool, and Megacool are offensive, ranged Psynergies. The total damage inflicted is determined by comparing the caster's Mercury Power to the target's Mercury Resistance and using this number to modify the base power of the particular Psynergy in use.

Cool: “Attack with freezing cold.”: This costs 6 Psynergy Points, has a base power of 35, and has a range of three targets. A small group of medium-sized icy stalagmites appear from the ground underneath the enemies to poke them. It is available at level 4.

Supercool: “Attack with freezing cold.”: This costs 14 Psynergy Points, has a base power of 80, and has a range of five targets. A moderately large group of medium-sized icy stalagmites appear from the ground underneath the enemies to poke them. It is available at level 21.

Megacool: “Attack with freezing cold.”: This costs 33 Psynergy Points, has a base power of 180, and has a range of seven targets. A large, wide group of medium-to-large icy stalagmites appear from the ground underneath the enemies to poke them. It is available at level 48.

The visual effects of the Cool series vary between game appearances. In The Lost Age, each stage of the Cool series features a group of criss-crossing icy stalagmites that erupt from the ground in rapid succession to strike the enemies. The size and number of stalagmites increases with each successive stage.

Elemental Power attacks such as Cool, Supercool, and Megacool use a set base power as the base damage to be modified. For example, the base power of Megacool is 180. Thus, an unmodified Megacool would do around 180 points of damage.

Attacks from each stage of the Cool series take this base damage value and uses it in the following equation:

Therefore, a Megacool cast under these circumstances would deal approximately 180 points of damage to the targeted enemy. Since Megacool is a ranged Psynergy, adjacent targets take a percentage of the total damage, with the percentage decreasing as distance from the main target increases.

General: In terms of overall power, the Cool series features the some of the strongest the Power-based Mercury Psynergies, with Megacool being second in power to Freeze Prism. Thus, the series features a great deal of offensive power, and is an excellent option for attacking Mercury-weak enemies. The series's can be said to possess a relationship to the Douse/Frost series that is often compared to the relationship between the Wind Seer class's Ray and Plasma, with Frost/Douse being weaker and more efficient, and the Cool series being more expensive but also more powerful. Megacool also has the distinction of possessing the widest range of any offensive Mercury Psynergy, allowing a great deal of flexibility in random battles against multiple opponents.

Golden Sun: The Lost Age: Piers will already know Cool when he joins the party, and will be learn Supercool shortly after. Due to the lack of Mercury-weak monsters at this point, Supercool will have few chances to shine. However, once Megacool is learned, it becomes an excellent tool at Mars Lighthouse, where a number of Mercury-weak monsters reside. However, its use can be limited by Piers's lower PP pool, as Megacool costs a whopping 33 PP.

Golden Sun: Dark Dawn: The Cool series is one of Amiti's strongest options. As before, there are few Mercury-weak monsters to take advantage of. However, the series is an excellent option to soften up other opponents. Like Piers, Amiti suffers from a low PP pool. However, unlike Piers, he can access several pieces of equipment that, when put together, increases Amiti's Mercury Power to its maximum. This effectively doubles the power of the series, allowing Amiti to get more mileage out of each cast.

Retrieved from "https://goldensun.fandom.com/wiki/Cool_Psynergy_series?oldid=42829"
Community content is available under CC-BY-SA unless otherwise noted.