Craggy Peak Ruins is a dungeon in Golden Sun: Dark Dawn. It is located on the Craggy Peak at Khiren Mountains and serves as the midway point between Passaj and Te Rya Village. It can only reached by ascending Clouds of Passaj after reversing the flow of the Alchemy Forge. Inside the ruins is a relatively large dungeon with simple puzzles based in rooms based on the Zodiac symbols.

Insight can be used for hints to solve the puzzles, especially the Capricorn puzzle room with 3 goats and the need to move the left + right ones in a spiral so the center one has an open pathway.

The Craggy Peak Ruins were once the home of the Neox, a tribe of Jenei, or ancient Adepts. In ancient times, the Neox were known to travel to and from the home via a cloud passageway, that led to the home of their allies, the Exathi in their home of Passaj. Access to the Ruins was controlled via the Alchemy Forge, a machine that created the cloud passage using the mineral Zol, as well as Mars and Mercury psynergy. When the Neox died out, the Craggy Peak Ruins were deserted; in addition, the Alchemy Forge was rendered inactive.

In the years that passed, the Neox home fell into legend. Later on, Matthew's party would reactivate the Alchemy Forge, in an attempt to access the Ruins, as they were part of the only available way to cross the Khiren Mountains. After realizing the ruins were deserted, Matthew's party explores the ruins and solve its puzzles. Eventually, the Adepts were able create a pathway from Craggy Peak to the valley below, allowing them to continue on their journey to Morgal. 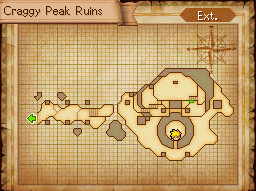