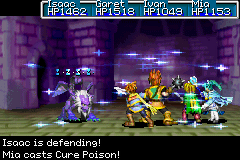 Cure Poison is a single-target non-damaging Psynergy that can only be used on an Adept with the Poison or Deadly Poison status. Though Cure Poison is Mercury aligned, the Mercury Power of the user does not affect the potency of the Psynergy.

This wide availability means that Adepts of all elements can learn Cure Poison. However, non-Mercury Adepts generally need varying numbers of Mercury Djinn, with the major except of Sveta. It is available at Level 1 for White Mage and Level 5 for all other classes.

Cure Poison is an extremely useful Psynergy, equivalent to an Antidote. Because it costs so few PP (2), when it is first acquired, most players do not bother using normal Antidotes again. As both types of Poison statuses linger after battle, Cure Poison is a necessity to help prevent further damage to the party. Thankfully, Cure Poison is so common that the player is guaranteed to have at least one Adept that can use it.

The manual to the North American version of The Lost Age incorrectly refers to this Psynergy as "Antidote", which is a consumable item with the exact same effect as this Psynergy. However, this is more likely because the Japanese name of the Psynergy is Antidote.