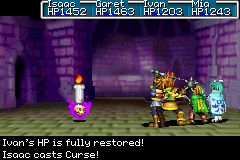 Curse is a Venus-based support Psynergy found throughout the Golden Sun series.

Curse is a single-target, non-offensive Psynergy. Curse's chance successfully inflicting a status change changes depending on the Luck statistic of the target(s).

Visually, Curse features a single lit candle forming above the target. In Golden Sun: Dark Dawn, a circle of small flames will form around the target prior to the candle appearing.

Curse is a status-altering Psynergy that may instantly inflict the Death Curse status on a target. Like all status-changing Psynergies, the rate of success is related to the Luck of the target. Lower Luck levels result in a higher rate of success. Curse's Death Curse effect is linked to a counter that decreases by one every time the afflicted character afflicted character performs an action or an enemy successfully uses Curse on them. The target will automatically be Downed after performing seven actions. The Death Curse status inflicted by Curse can be reversed in-battle by Restore, an Elixir, or a Djinn that removes status changes. The effects of Curse also end automatically when a character is downed or when a battle is ended.

Like most status-changing Psynergy, Curse has few occasions to be of practical use, despite its theoretically valuable effect. Battles against common enemies, which have low enough Luck to be affected, will usually end before the Death Curse takes effect. Meanwhile, most bosses are immune to status-changing Psynergies due to their high Luck.

Curse only becomes of concern which used by certain bosses, such as Dullahan, where battles can be drawn out long enough for its effect to trigger. Even then, high-powered bosses can sometime down a targeted Adept with other techniques before the Death Curse triggers. In addition, the Death Curse is relatively easy to heal in-battle.