Cutting Edge and Plume Edge are related Mercury Psynergies featured throughout the Golden Sun series that are functionally identical but have different levels of power.

Cutting Edge and Plume Edge are offensive, single-target Psynergies that are Attack-dependent, meaning characters with higher Attack ratings will deal more damage with these attacks. In addition, the caster's Mercury Power and the target's Defense and Mercury Resistance all factor into the damage dealt. 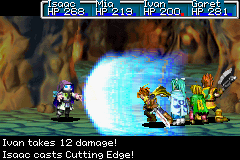 Cutting Edge: "Inflict damage with a shock wave": Cutting Edge is the weaker of the two Psynergies in the series. Cutting Edge appears visually as a blue shockwave being fired into the target as the user swings their weapon. The technique is available to the Swordsman, Defender and Cavalier classes in both versions of the Swordsman series, as well as the Dragoon class in its series. Statistically, Cutting Edge converts all damage to Mercury and has a base power equal to the caster's Attack stat plus 32. It costs 5 PP to use. 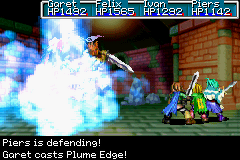 Plume Edge: "Attack with a foaming geyser": Plume Edge is the upgraded replacement to Cutting Edge. Visually, Plume Edge resembles a geyser erupting from beneath the foe, and the user striking them with their weapon while the enemy is suspended on top of the geyser. Upon reaching the Guardian (Venus Swordsman), Luminier (Mars Swordsman), or Templar (Dragoon) classes, the Psynergy takes over Cutting Edge. Statistically, Plume Edge converts all damage to Mercury and has a base power equal to the caster's Attack stat plus 80. It costs 15 PP to use.

Cutting Edge's attack takes this base damage value and uses it in the following equation:

To word this in prose, Cutting Edge and Plume Edge take the base damage of the user's normal physical attack, add a set amount of bonus damage to that, and then this result is modified by how much higher or lower the user's Mercury Power is than the target's Mercury Resistance. The difference between the user's Mercury Power and the target's Mercury Resistance is divided by 400, then 1 is added to this, resulting in what can be called the "elemental damage multiplier". This number is what the Psynergies' damage is multiplied by.

Therefore, a Cutting Edge cast under these circumstances would deal approximately 165 points of damage.

It should be noted that Plume Edge was not introduced until The Lost Age, and thus will not be learned in Golden Sun, even if the Adept is in the required class.

General: Cutting Edge's damage output is roughly the same as other elemental physical attack Psynergies like Heat Wave and Ragnarok, but is slightly lower due to a lesser amount of added damage. Cutting Edge is roughly on-par with a mid-game Unleash (with the main difference of costing Psynergy Points instead of activating at random) and is more valuable the earlier it is acquired. Plume Edge, on the other hand, is much weaker than comparable Psynergies such as Odyssey and Liquefier. However, the pair have slightly lower PP costs in relation. For the two Swordsman classes, Cutting Edge and Plume Edge are the only offenses Mercury Psynergies available, making them the offense of choice for those classes.

Golden Sun: While Cutting Edge under performs relative to Planet Diver, it remains a valuable technique in the early stages of the game due to the higher PP rating and overall utility of the Swordsman class series compared to the Brute class series. If the player is leveled up enough for it to be available, it can help make short work of Saturos at Mercury Lighthouse. As Isaac will receive a Mercury-based artifact weapon, the Arctic Blade, at roughly the same time that Cutting Edge and Planet Diver become available, Cutting Edge becomes a useful attack from this point until the end of Lamakan Desert, particularly against the Mars-based enemies found in the desert.

Golden Sun: The Lost Age: Due to an unequal Djinn distribution early on, Jenna is a viable Swordsman candidate to give her early access to Ply and make use of her Pirate's Sword - when not healing, Cutting Edge becomes her most valuable offense. Against enemies resistant to Mercury, however, Cutting Edge loses much of its luster, and should be ignored in favor of a Venus or Mars Psynergy, if not a regular attack. Once Piers joins the party, Cutting Edge and Plume Edge are outclassed by his Diamond Dust and Diamond Berg Psynergies. Combined with a lack of Mercury-weak enemies in general, Cutting Edge and Plume Edge will see little use.

Golden Sun: Dark Dawn: Cutting Edge's most likely use will be against the Sand Prince in Ayuthay, as there are few major bosses weak against Mercury. Tyrell can make decent use of Cutting Edge, as otherwise, his Mars Psynergies would have little effect on the Sand Prince. After this point, Amiti's Diamond Dust and Diamond Berg psynergies are generally a better option, due to the limitations of the Swordsman class.