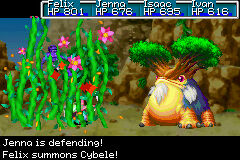 "The great mother of the earth."

Cybele is a Summon sequence of the Venus element. When three Djinn of the Venus Element are on standby, the Cybele Summon sequence can be activated. In the GBA series, the sequence appears as a large, orange-and-blue amphibian with a beard and a pair of trees growing from its head, dropping down and spitting out a small bunch of seeds that land at the feet of the enemy forces, grow into a mass of long vines, and entangle and carry the enemy up offscreen for a moment. Then, the vines dissipate and the enemies fall back down to earth. This frog creature was originally assumed to be Cybele until Golden Sun: Dark Dawn revealed it to be merely her pet or underling.

Cybele has a base Venus power of 120 and also does additional damage equivalent to 9% of the enemy’s maximum HP. Cybele is the first truly useful Venus summon sequence. It is twice as powerful as Ramses and uses only 1.5 times the amount of Djinn on standby. It can be very effective in the boss fight against the Killer Ape in Mogall Forest, where the third Venus Djinni necessary to use Cybele can be found right beforehand.

Cybele was first confirmed to return as a Venus-aligned summon sequence in a Japanese-language Summon trailer posted on Nintendo's official Golden Sun: Dark Dawn site. It reveals that she actually appears as a giant, silver-haired maiden, and that it is she that sends the frog to assist the party via entangling the enemy forces. In Dark Dawn, Cybele reclines in a barren wasteland, but as she awakens, lush grass and trees overtake the landscape. She then conjures a petite form of the vine frog, and gently blows it away so that it lands in the battle scene. The frog immediately burrows into the ground underneath the enemy group and makes vines burst out of the ground with enough force that the enemies are propelled far up into the air.

It should be noted that the frog appears to be a younger form of the frog that appeared in previous games; it is smaller, in place of two trees on its head are two leaves, and it does not have a beard of any sort.

Cybele was a Phrygian earth mother goddess who was adapted into Greek and Roman mythology as the mother of the original six Olympians; known as Rhea to the Greeks. She is depicted in art as a human woman, much like in Dark Dawn.

Cybele full GBA sequence
Add a photo to this gallery
Retrieved from "https://goldensun.fandom.com/wiki/Cybele?oldid=39667"
Community content is available under CC-BY-SA unless otherwise noted.