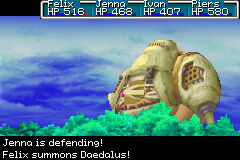 Daedalus is a Summon of the Mars element first appearing in Golden Sun: The Lost Age and Golden Sun: Dark Dawn. It is one of fourteen summons that is not automatically available to the player once the required Djinn are collected. Instead, the player must acquire the summon from a Summon Tablet. It is also one of four summons, including Iris, Catastrophe, and Azul, that can only be accessed after defeated a unique boss.

For a successful summoning of Daedalus, the player must have 4 Mars Djinn and 3 Venus Djinn on standby. In contrast to all other offensive summons, Daedalus's attack takes place over two turns. When summoned, Daedalus’s salvo of small missiles damages all foes with a base Mars power of 100 and takes an additional 7% of the enemy’s maximum HP. In addition, the summoner's Mars and Venus Power will rise by 100 and 60 points, respectively. The battle is then waged as normal until the end of the next turn, when suddenly the giant missile appears from the sky and detonates in a massive explosion, damaging the opposition with a Mars power of 250 and taking an additional 15% of the enemy’s maximum HP. The missile portion of the attack does equal damage to all opponents.

Daedalus's summon sequence resembles a giant golem-like statue emerging from a forest, launching a barrage of small missiles and then a single, larger missile, fueled by some sort of fantasy technology. The smaller missiles will hit in a group the first turn, causing small explosions. The larger missile strikes the targets the next turn, causing a much larger explosion. Players who haven't enhanced the game with a password from the first Golden Sun will find it the strongest Mars summon at their disposal.

Daedalus is among Azul, Catastrophe, Charon, and Iris as “ultimate” Summons in The Lost Age and Dark Dawn, though the far more powerful Iris summon outshines it. However, Daedalus has more manageable Djinn requirements, making it easier to summon during battles. One may be excused for thinking of the Daedalus setup of two attacks in two turns as a silly gimmick, and that it would have been better if both attacks were treated as one like with all other summons, especially since there is only one boss against whom the special effect truly changes anything. A strategy, however, that can be used to take advantage of this setup is to summon Daedalus in the first turn, and in the next turn lower the enemies' resistances so that the impending missile attack will deal more damage.

In reference to The Lost Age, it should be noted that Daedalus becomes the most powerful Mars summon available in a non-password enhanced game. This is because the dungeon location of Iris requires that the player have all 72 Djinn, which is impossible to attain without a password.

Daedalus itself bears no resemblance to its mythological counterpart. Instead it resembles one of his creations. In Greek myth, Daedalus was a great inventor and the father of the more well-known Icarus. Among Daedalus's inventions was Talos, the giant bronze robotic guardian of the island of Crete. He also built the labyrinth used to house the Minotaur, the source of the Minotaurus monster line.

Retrieved from "https://goldensun.fandom.com/wiki/Daedalus?oldid=42845"
Community content is available under CC-BY-SA unless otherwise noted.