Death Plunge and Death Leap are offensive, single-target Psynergies that are Attack-dependent, meaning characters with higher Attack ratings will deal more damage with these attacks. In addition, the caster's Jupiter Power and the target's Defense and Jupiter Resistance all factor into the damage dealt. 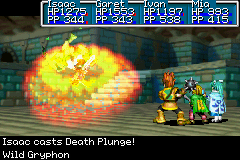 Death Plunge is described as "Plunge your weapon into a foe". The user leaps at the target plunging their weapon into the foe, then leaping high in the air with the target and then slamming the target hard on the ground. It can be used by the Ninja class series. It cost 14 PP to use and attacks with the attacker's own attack power plus an extra 40 attack points, making it potentially even more powerful than Planet Diver. In addition, it has a chance to stun the target. 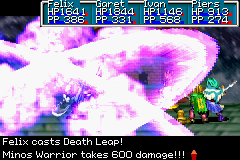 In Golden Sun: The Lost Age, after reaching the Disciple class, Death Plunge is replaced by the more powerful (and expensive) Death Leap. Death Leap is described as "Beat a foe with a strange fan". Visually, it is almost identical to Death Plunge, only more dramatic. Like Planetary, despite being expensive, the power alone makes it worth using against many enemies. Unlike Planetary, the classes that can use Death Leap have relatively large PP reserves (the Master's PP multiplier is 1.6, whereas the Chaos Lord's is 1.2). Death Leap costs 22 PP to use and strikes the target with power equal to the user's own attack power plus an additional 110 attack points. Like Death Plunge, this makes it potentially even more powerful than Planetary, although a Master's base Jupiter power will not be as high as a Chaos Lord's base Mars power. It has the same ability to stun the target as Death Plunge.

Death Plunge's visual effects feature the user launching themselves at the target, then jumping high into the air with the target. The user then forcefully slams the target into the ground, generating a small red shockwave from the point of impact.

Death Leap features the user grabbing the opponent, then jumping high into the air. The user then slams the opponent forcefully into the ground, causing a purple shockwave to emit from the point of impact.

Death Plunge's attack takes this base damage value and uses it in the following equation:

To word this in prose, Death Plunge and Death Leap take the base damage of the user's normal physical attack, add a set amount of bonus damage to that, and then this result is modified by how much higher or lower the user's Jupiter Power is than the target's Jupiter Resistance. The difference between the user's Jupiter Power and the target's Jupiter Resistance is divided by 400, then 1 is added to this, resulting in what can be called the "elemental damage multiplier". This number is what the Psynergies' damage is multiplied by.

Therefore, a Death Plunge cast under these circumstances would deal approximately 175 points of damage.

Death Plunge and Death Leap are exclusive to the Ninja class series, which is available to Venus, Mars, and, to a lesser extent, Jupiter Adepts. Venus and Mars Adepts require both Jupiter Djinn and Djinn of their symbiotic element to access the class. Jupiter Adepts require large numbers of both Venus Djinn and Mars Djinn in a specific ratio of 6 to 3 to access the class.

It should be noted that the Disciple class (and thus Death Leap) is not available in Golden Sun, due to the player being limited to 7 Djinn on any one Adept.

General:The Death Plunge/Death Leap duo are among the most useful Psynergies in the series for multiple reasons. First, each have excellent added damage for the stage they are learned at, higher than equivalent series like the Ragnarok and Odyssey. In addition, they have the useful ability to inflict Stun on an opponent, immobilizing the opponent for several turns. The Ninja has an excellent attack statistic to back up both Psynergies, and unlike other related series, the Ninja has a solid PP pool. This is in contrast to other classes like the Brute, where the Brute's low PP cap limits repeated castings of Planetary. For most endgame situations, Death Leap will be used interchangeably with Annihilation, allowing the Ninja to do excellent damage to any opponent.

Golden Sun: Should all possible Djinn be collected prior to Colosso, Isaac can enter the Ninja class for the tournament. Death Plunge's power and chance to Stun will make quick work of the other Colosso participants.

Golden Sun: The Lost Age: The Ninja class will become available while exploring the Great Eastern Sea. Death Plunge is an excellent option for fighting the Serpent, due to the Serpent's Jupiter weakness, and could be used by both Felix and/or Jenna should the player so choose. Once the player can access the Disciple or Master stage, Death Plunge becomes an excellent offensive choice for anyone in those classes, but can be particularly useful against the final boss, which is Jupiter-weak.

Golden Sun: Dark Dawn: The Ninja class will become available during the latter portions of Morgal. Death Plunge is an excellent choice for combating both Sludge and the Mountain Roc. Death Leap is a good option for combating the final boss, as well as the Ancient Devil.

Retrieved from "https://goldensun.fandom.com/wiki/Death_Plunge_and_Death_Leap?oldid=42305"
Community content is available under CC-BY-SA unless otherwise noted.