This article is about the Psynergy. For the status condition associated with this Psynergy, see Delusion 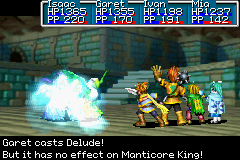 Delude (イリュージョン, Illusion) is a Jupiter-based support Psynergy featured throughout the Golden Sun series. The Mist Psynergy, available to the Ninja class series, is identical in function.

Delude is a non-damaging, ranged Psynergy that has the potential to change a target's status. The chance of inducing a status change depends on the Luck of the target(s) in question; lower enemy Luck results in a higher rate of success.

Delude's visual effects feature a blue cloud of smoke appearing around the feet of the targeted enemy. The cloud will slowly rise up before disappearing.

Delude is a status-altering move that inflicts the Delusion status. After a successful cast of Delude, the target's physical Attack has an increased chance of missing for a limited duration of time, usually lasting four to five turns at the most. Delude's success is dependent on the Luck of the target; a target with lower Luck is more likely to be inflicted with Delusion than a target with high Luck. Delude's effect can be reversed via the Restore Psynergy or by using the items Elixir or Dried Lizard. Otherwise, the effect wears off within a few turns or when the battle is ended.

In theory, Delude is a useful technique, as inflicting status changes can decrease the difficulty of a battle. In practice, however, certain facts keep Delude from regular usage. First, the Delusion status only decreases the chance of a standard Attack, enemy skills and Psynergy remain unaffected. Additionally, due to its success rate being dependent on enemy Luck, most Bosses are immune to Delude's effects, even if the rate of a standard Attack was high enough to justify the use. However, Delude can have some early game potential, as it is available as soon as the player gets their first Jupiter Djinni. Since most enemies at this point rely on basic Attacks and have low Luck, Delude can sometimes be a useful tool until the party levels up enough to easily defeat these enemies.