Demon Night and Thorny Grave are ranged Psynergies. The final amount of damage is determined by comparing the user's Venus Power to the target's Venus Resistance and using the difference to modify the base power of the particular Psynergy in use. 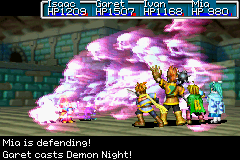 Demon Night: "Strike with a myriad of monsters": Demon Night is available to an Adept who is a member of the Samurai class. It is learned at level 18 and costs 12 PP and has a base attack of 60. 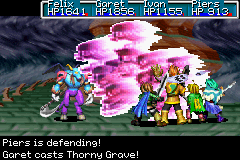 Thorny Grave: "Summon a loathsome fiend": is available when an Adept becomes a member of the Ronin class, and is therefore unavailable in Golden Sun. It replaces Demon Night and increases the base damage to 170. The PP required also doubles, meaning that the Psynergy costs 24 PP.

In Golden Sun and The Lost Age, Demon Night features a group of purple colored spirits attacking the enemy. The spirits are small in size, but relatively numerous. In Dark Dawn, the caster will plunge their weapon into the ground. Meanwhile, the surrounding area will grow dark with a blue mist lingering about. Multiple blue spirits will emerge from the ground to attack the foe.

Thorny Night retains the general visual characteristics, but with a few key differences. In The Lost Age, the summoned spirits are larger in size, and are colored a dual purple/black. Dark Dawn's version is extremely similar to Demon Night, but features larger and more numerous spirits.

Elemental Power attacks such as the Demon Night series use a set base power as the base damage to be modified. For example, the base power of Thorny Grave is 170. Thus an unmodified Thorny Grave would deal around 170 points of damage.

Thorny Grave's attack takes this base damage value and uses it in the following equation:

To word this in prose, The Demon Night series takes the base damage of the particular attack, and then modifies this by how much higher or lower the user's Venus Power is than the target's Venus Resistance. The difference between the user's Venus Power and the target's Venus Resistance is then divided by 200, then 1 is added to this, resulting in what can be called the "elemental damage multiplier". This number is what the Psynergies' damage is multiplied by.

For example, if an Adept with a Venus Power of 150 casts Thorny Grave on a monster with a Venus Resistance of 50:

Therefore, a Thorny Grave cast under these circumstances would deal approximately 255 points of damage to the targeted enemy. In addition, other enemies in range of the attack would take a percentage of the original damage, with the percentage decreasing as distance from the main target increases.

Demon Night and Thorny Grave are unique to the Samurai class series, meaning that only Venus and Mars Adepts have access to the series. The exception to the rule is the Venus Adept Himi, who cannot access the class. Similarly to the Ragnarok series, Thorny Grave is a replacement for Demon Night as higher classes are reached. Demon Night is available to the Samurai stage, while Thorny Grave is available to the Ronin stage of the class. Both Psynergies can be learned at Level 18, with only the Adept's class determining which Psynergy is learned.

General: While useful in theory, the Demon Night series is often overlooked in favor of the other numerous Psynergies available to the series.

Golden Sun: Demon Night will be weaker than Rockfall, which will generally be available to the typical endgame party. Generally, the Samurai will be used more for its overall sturdiness and array of buffing Psynergies, thus, Demon Night will see little use.

Golden Sun: The Lost Age and Golden Sun: Dark Dawn: While Demon Night's usage will be similar to its previous appearance, Thorny Grave is a viable, if overlooked option. Thorny Grave has the distinction of being the strongest multi-target Psynergy available. However, it will pale in comparison to the raw power of Epicenter, and the strength and reliability of Quick Strike.