Douse, Drench, and Deluge are a series of Mercury-based offensive Psynergies featured in all Golden Sun games. The first stage, Douse, is also an important Utility Psynergy throughout the series. Douse's Encyclopedia entry reads as follows:

"This water-based Psynergy conjures a small storm cloud that can extinguish fires and fill small cavities with water." 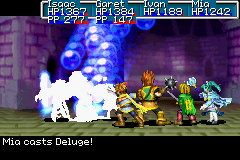 Douse, Drench, and Deluge are ranged Psynergies. The total damage inflicted is determined by comparing the caster's Mercury Power to the target's Mercury Resistance and using this number to modify the base power of the particular Psynergy in use.

Douse: "Attack with a surge of water.": This costs 5 Psynergy Points, has a base power of 25, and has a range of three targets. A small array of watery spheres rains down on the targets. This Psynergy can also be used in the field. It is available at level 1 for the Pilgrim class and level 2 for the Ranger class.

Drench: "Attack with a torrent of water.": This costs 10 Psynergy Points, has a base power of 60, and has a range of three targets. A moderately long array of watery spheres rains down on the targets. It is available at level 12.

Deluge: "Attack with a deadly flood.": This costs 20 Psynergy Points, has a base power of 120, and has a range of five targets. A large array of watery spheres rains down on the targets. It is available at level 30.

In Golden Sun and The Lost Age, each stage of the Douse series resembles an array of watery spheres crashing down onto the enemy. The number of spheres increases for each successive stage of the series. In Dark Dawn, the visual effects are slightly revamped. Each stage shows the crashing of watery spheres from a cloud in the sky. The series also features successively larger splashes of water gushing up from the impact of each sphere.

Elemental Power attacks such as Douse, Drench, and Deluge use a set base power as the base damage to be modified. For example, the base power of Deluge is 120. Thus, an unmodified Deluge would do around 120 points of damage.

Attacks from Deluge take this base damage value and use it in the following equation:

Therefore, a Deluge cast under these circumstances would deal approximately 180 points of damage to the targeted enemy. Since Deluge is a ranged Psynergy, adjacent targets take a percentage of the total damage, with the percentage decreasing as distance from the main target increases.

As a Utility Psynergy[edit | edit source] 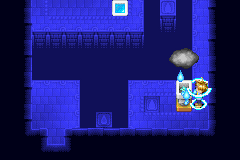 Douse can be used outside of battle to cause a little rainfall, which can fill up some puddles in certain areas and put out certain fires. It is also used in the Suhalla Desert to stop the whirlwinds caused by the Tornado Lizards. This Psynergy is integral to solving many puzzles in both games. In fact, you get a Utility Psynergy Item containing Douse (the Douse Drop) in response to defeating the Killer Ape boss of Mogall Forest in Golden Sun, so you can always have access to this Psynergy regardless of your classes. In The Lost Age, casting Douse on various stones located in and around Aqua Rock causes a variety of water-related effects.

In Dark Dawn, Douse's utility function is described in game as the ability to "Summon a downpour that extinguishes fires." This is demonstrated in game via a cutscene in Harapa, where Rief uses Douse to extinguish a fire started by Tyrell. In the game, Douse can be aimed in any direction within a 360 degree radius, producing a cloud that travels in a straight line for a short distance, with the maximum distance being about 6 squares away. This means that the player does not have to be standing right next to the target in order to solve a puzzle. In addition to filling puddles and putting out fires, Douse can be used to fill small bowls that allow the player to manipulate the water level of the area. In the Belinsk Ruins, Douse is used in several puzzles as the embodiment of Mercury Psynergy.

As a minor easter egg, in the first two Golden Sun games, Douse will generate a cloud that drops slowly falling snowflakes instead of large water drops when cast in a wintry exterior area: the town of Imil, E Tundaria Islet, the front entrance and exterior peak of Tundaria Tower, Kalt Island, and the town of Prox.

The availability of the Douse series changes slightly from the GBA games to Dark Dawn. The series is available to the water-based Pilgrim class series and the Ranger class series in all games. In Dark Dawn, the series is made available to the Water Seer class series, replacing the Frost Psynergy series, as well as the Aqua Squire class series. Hence, all Mercury, Mars, and Jupiter Adepts can use this series of Psynergy, though non-Mercury Adepts need varying amounts of Mercury Djinn in order to gain access to it. Douse is learned at Level 1 for the Pilgrim and Aqua Squire classes, and at Level 2 for the Ranger and Water Seer classes. All classes learn Drench at Level 12 and Deluge at Level 30.

Douse, by itself, can also be learned by means of the Douse Drop, while Piers knows it no matter the class, though in both cases the user won't acquire either of the other two Psynergy spells. In Dark Dawn, Rief and Amiti will retain access to Douse regardless of their classes, but will only possess the other two stages if in a class with access to them.

General: During the early portions of the game, the Douse series is outperformed in both games by the Cool and Ice Psynergy series, which come with the player's resident Mercury adept by default. However, it serves as a potent mid-game Psynergy, being a placeholder for more powerful, but later learned Psynergies. If using the Pilgrim class, the Douse series may serve as a placeholder for the Prism Psynergy series. Deluge is the strongest Mercury Psynergy available to the Ranger class series. However, it is less useful during latter portions of the game, due to its comparatively lower power.

Golden Sun: The Douse series can be of great use against Mars-weak enemies, particularly Saturos and Menardi at Venus Lighthouse. Setting Ivan to the Ranger class will allow him to inflict good damage to both of them, allowing Mia to heal or use Mercury summons.

Golden Sun: The Lost Age: Given Piers's more physical capabilities, his own Cool and Diamond Dust series are likely to see more use than the Douse series he can gain in other classes. Possible usage of the Douse series would likely come against the Fire Adepts Karst and Agatio, where the player may choose to change Jenna's class in order to have more Mercury-capable Adepts.

Golden Sun: Dark Dawn: The Douse series replaces the Frost series in the Water Seer's Psynergy lineup. While the series is still outclassed as a whole by the Ice series, Deluge has the advantage of being able to hit more enemies than any of the Ice series Psynergies. Also, the Douse series, in general, is learned at earlier levels than the Ice series and thus serves as a decent placeholder for Ice Missile, which is learned much later. Since Rief has so few offensive Psynergies naturally, the Douse series becomes an important offensive option for most of the game. Amiti, on the other hand, has other options in his Diamond Dust and Diamond Berg Psynergies, as well as the Cool series. Thus, Douse will see less use, but can still be a good placeholder during the middle portions of the game.

Retrieved from "https://goldensun.fandom.com/wiki/Douse_Psynergy_series?oldid=42576"
Community content is available under CC-BY-SA unless otherwise noted.