Dragon Cloud (ぼくえんりゅう, Divining Flame Dragon) and Epicenter (ぼくしんりゅう, Divining God Dragon) are a pair of Mars Psynergies featured throughout the Golden Sun series. Due to being used exclusively by the Samurai class, they are not frequently used, but are considered among the Samurai series' best attacks. 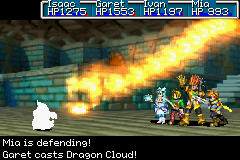 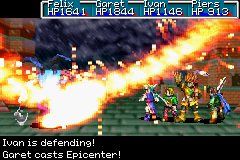 Retrieved from "https://goldensun.fandom.com/wiki/Dragon_Cloud_and_Epicenter?oldid=42495"
Community content is available under CC-BY-SA unless otherwise noted.