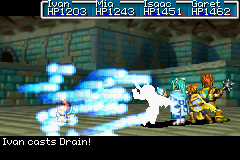 Drain costs 3 PP and has a range of one. What makes this unique is that unlike all other offensive Psynergies the health of the Adept casting Drain is restored by the same amount of damage done. Drain does around 50 damage.

Drain has the same problem as Psy Drain in that by the time that an Adept is at the sufficient level to learn it, the Psynergies become near useless. The amount that it restores is the same as an Herb, an item that is generally not used late in the game. The damage that it does is near negligible for later level foes, making it lacking in that area as well. One of the few times that it may be used is if the Adept is low on PP because the cost for Drain is very low; however, it is much more advantageous to use a Nut, or better yet, a Potion, as they restore much more Hit Points for no Psynergy Points.

Retrieved from "https://goldensun.fandom.com/wiki/Drain?oldid=29381"
Community content is available under CC-BY-SA unless otherwise noted.