The Dull Psynergy series are two Jupiter based Support Psynergies found in both Golden Sun games that are used to lower the Attack of one or more enemies. They are only available to the White Mage class series, meaning only the Jupiter and Mercury Adepts can learn them. 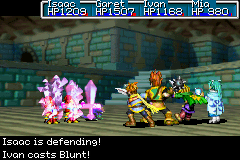 Dull is available at level 11 and costs 6 PP. It has a range of 1 and is used to lower a single enemy's Attack by 25%, with a 50% max. A similar Psynergy can be found in the Sword Card Psynergy of the Pierrot Class series.

While at first glance, reducing an enemy's attack would seem like a potent spell, the problem with this Psynergy series is that it has no effect on Psynergy-based attacks, and thus the utility of this move varies from enemy to enemy. Normal random-encounter monsters are usually not enough of a threat to warrant attack reductions, and often this spell will not work on bosses. Furthermore, it is only available in a few specific classes, so this Psynergy series is very situational. However, if it does work, and if used in conjunction with a move like Seal, and Guard, then this may prove to have a large effect on the outcome of the battle, especially since it is not effected by the Break Psynergy.

Retrieved from "https://goldensun.fandom.com/wiki/Dull_Psynergy_series?oldid=38311"
Community content is available under CC-BY-SA unless otherwise noted.