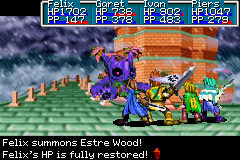 The Elder Wood Psynergy set is a series of Support techniques available to the Tamer class series. Entry into that series requires the Trainer's Whip, an artifact only found in Golden Sun: The Lost Age. This set differs from a typical restorative Psynergy series, such as Cure, in that all the Psynergies are learned at the same level, 15, and don't increase in the amount of Psynergy Points required (14) as the series progresses. There are a total of two different Psynergies learned and as the Adept advances classes the newly learned Psynergy replaces the old one. This set is fairly unique compared to other sets that are learned by a Tamer, in that both of the Spells are based on the same element, Mercury. Although similar in effect to Wish and other restorative Psynergies, unlike them the Elder Wood Psynergy set can not be used in the field.

This set is notable because neither of the sprites actually appear in either game other than when used in this series. Both Elder Wood and Estre Wood would be members of the Wood Walker monster line if they had been encountered as enemies.