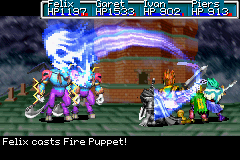 Fear Puppet is a ranged, non-offensive Psynergy. Fear Puppet's chance of successfully inflicting a status change changes depending on the Luck statistic of the target(s).

Visually, Fear Puppet features the caster taking a position akin to being Downed. A ghostly blue skull will travel out of the caster, arcing over to attack the target. Blue energy will trail behind the skull, following the path the skull takes.

Fear Puppet is a status-altering Psynergy that may instantly inflict the Stun status on a target. Stunned targets will be unable to move for a limited duration of time. Like all status-changing Psynergies, the rate of success is related to the Luck of the target. Lower Luck levels result in a higher rate of success. Fear Puppet's effect can be neutralized by using an Elixir or Dried Lizard on the affected target; otherwise, it may end automatically after a number of turns or when the battle ends.

In Golden Sun: The Lost Age, Fire Puppet is exclusive to the Dark Mage class series, an item-dependent class accessible to any Adept that has equipped the Tomegathericon. Thus, all Adepts can access Fire Puppet. In Golden Sun: Dark Dawn, Fear Puppet is exclusive to the Curse Mage class series, a dual-elemental class available only to the Venus Adept Himi. Himi requires large amounts of Mars Djinn to access the class. In both classes, Fear Puppet will be available at Level 20.

Stunning is an extremely useful ability as it completely neutralizes a target for a time. Fear Puppet is unique in that it is one of only two abilities, the other being the summon Azul, that is capable of stunning multiple targets. The main draw back is that the player has access to multiple techniques that may stun a only single target but also do high amounts of damage. Thus, while Fear Puppet can be useful, it will often be passed over in favor of damaging techniques.