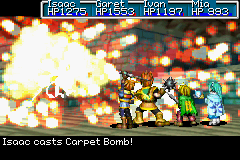 Fire Bomb, Cluster Bomb, and Carpet Bomb are a series of Mars Psynergies featured throughout the Golden Sun series. Prior to Golden Sun: Dark Dawn, it was visually identical to the Starburst Psynergy series.

Fire Bomb, Cluster Bomb, and Carpet Bomb are offensive, ranged Psynergies. The total amount of damage is determined by comparing the user's Mars Power to the target's Mars Resistance and using this value to modify the base power of the particular Psynergy.

Fire Bomb: "Attack with a bomb blast.": This costs 5 Psynergy Points, has a base power of 35, and has a range of three targets. There is a small explosion at the base of the enemies. It is available at level 6.

Cluster Bomb: "Attack with a bomb blast.": This costs 11 Psynergy Points, has a base power of 65, and has a range of five targets. There is a larger explosion at the bast of the enemies and it is available at level 16.

Carpet Bomb: "Attack with a bomb blast.": This is costs 29 Psynergy Points, has a base power of 130, hits seven enemies, and is learned at level 40. It is a massive explosion at the base of an enemy.

In Golden Sun and Golden Sun: The Lost Age, the Fire Bomb series was visually identical to the Supernova series. Each stage featured a large explosion which separated into a mass of fireballs. The explosion was larger and longer in duration with each progressive stage. In Golden Sun: Dark Dawn, the series, like most of the Ninja class's Psynergy, features a unique casting animation, which shows red-outlined symbols emerging from a red scroll that forms around the caster. A dome of fire then expands outward from the enemies, surrounded by an expanding circle of fire. The formation becomes larger with each progressive stage.

Elemental Power attacks such as Fire Bomb, Cluster Bomb, and Carpet Bomb use a set base power as the base damage to be modified. For example, the base power of Carpet Bomb is 130. Thus an unmodified Carpet Bomb would do around 130 points of damage.

Carpet Bomb's attack takes this base damage value and uses it in the following equation:

For example, if an Adept with a Mars Power of 150 casts Carpet Bomb on a monster with a Mars Resistance of 50:

Therefore, a Carpet Bomb cast under these circumstances would deal approximately 195 points of damage to the targeted enemy. Since Carpet Bomb is a ranged Psynergy, adjacent targets take a percentage of the total damage, with the percentage decreasing as distance from the main target increases.

General: The Fire Bomb series is the only Mars-based series available to the Ninja class. It is comparatively weaker than the than the Starburst series, however it is also less expensive. Due to these factors, it will be a commonly used Psynergy for the class.