This article is about the psynergy series. For the Djinni, see Flare.

Flare, Flare Wall, and Flare Storm is a series of Mars attack Psynergy featured in all three games. They are among the earliest Psynergy spells the player encounters and masters. 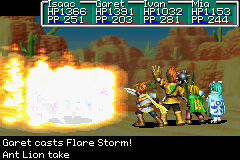 Flare, Flare Wall, and Flare Storm are ranged Psynergies. The total amount of damage is determined by comparing the user's Mars Power to the target's Mars Resistance and using this value to modify the base power of the particular Psynergy.

Flare: “Attack with flaring flames.”: This costs 4 Psynergy Points, has a base power of 15, and has a range of three targets. A small patch of fire goes through the enemies from left to right. It is available at level 1.

Flare Wall: “Attack with searing flames.”: This costs 7 Psynergy Points, has a base power of 40, and has a range of three targets. Two small patches of fire stacked upon each other go through the enemies from left to right. It is available at level 6.

Flare Storm: “Attack with incinerating flames.”: This costs 12 Psynergy Points, has a base power of 80, and has a range of three targets. Three small patches of fire stacked upon each other go through the enemies from left to right. It is available at level 18.

Visually, each stage of the series resembles a patch of fire circling around the enemies. With each successive stage, the amount and size of the patches of fire increase.

Elemental Power attacks such as the Flare series use a set base power as the base damage to be modified. For example, the base power of Flare Storm is 80. Thus an unmodified Flare Storm would do around 80 points of damage.

Flare Storm's attack takes this base damage value and uses it in the following equation:

For example, if an Adept with a Mars Power of 150 casts Flare Storm on a monster with a Mars Resistance of 50:

Therefore, a Flare Storm cast under these circumstances would deal approximately 120 points of damage to the targeted enemy. Since Flare Storm is a ranged Psynergy, adjacent targets take a percentage of the total damage, with the percentage decreasing as distance from the main target increases.

Golden Sun: Flare is the the first Psynergy available to Garet, and will remain his main source of offensive, ranged Psynergy for quite some time. While Garet does learn more powerful series, his lower PP pool means that the cheap Flare Storm will still be useful as time passes.

Golden Sun: The Lost Age: Flare is available to the level 5 Jenna at the prologue of The Lost Age, and is useful in the battle against the three Ruffians, however players should use the much stronger Fume to kill the Ruffians one by one. Jenna's decent PP pool plus the cheap cost of the series means that she can have a lot of endurance in the early battles. The Flare series will be outclassed by the Beam series later on; unlike Garet, Jenna's PP pool means she is not as limited in her use of these more powerful attacks.

Golden Sun: Dark Dawn: Like Garet before him, Tyrell's main source of early, offensive Psynergy comes from the Flare series. However, the Flare series competes with the Starburst Psynergy series for early usage, as Starburst and Nova in power and cost as Flare Wall and Flare Storm. By the time Eoleo joins the party, the Flare series will be outclassed by the Beam series; however, Eoleo's low PP pool means that Flare Storm may still receive usage in certain, limited, situations.

Oil Drop: Emulates the Flare Storm Psynergy for Mars damage to multiple enemies, but does so with the assumption that the user has 100 Mars Elemental Power instead of their actual value.

Retrieved from "https://goldensun.fandom.com/wiki/Flare_Psynergy_series?oldid=42700"
Community content is available under CC-BY-SA unless otherwise noted.