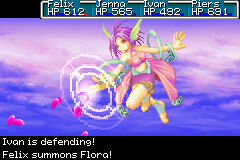 "The wind rider, goddess of flowers."

Flora is a Summon of the Jupiter element first appearing in Golden Sun: The Lost Age. It is one of fourteen summons that is not automatically available once the player has acquired the necessary Djinn, but must instead be acquired from a Stone Tablet.

Before Flora can be summoned, the player must encounter Flora's summon tablet.

In The Lost Age, Flora's tablet is found in an interior room in Air's Rock. Finding the summon requires a good degree of back-tracking through the dungeon after activating the whirlwind-spewing stone statues in the place and then solving a previously unavailable puzzle in an already visited room in order to attain Flora.

In Golden Sun: Dark Dawn, Flora's tablet is found in a cavern encountered while exploring Passaj Mountain Climb. While the cavern can be encountered early on, the summon is not accessible until the player has acquired Cold Snap.

For summoning Flora, the player must have 2 Jupiter Djinn and 1 Venus Djinn on standby. Flora has a base Jupiter power of 80 and also does additional damage equivalent to 9% of the enemy’s maximum HP. In addition, each foe may be put to Sleep. Afterward, the summoner's Jupiter and Venus Power will rise by 30 and 10 points, respectively.

In The Lost Age, Flora's summon sequence features a young, pink-clothed, purple-haired goddess in the skies with small green wings in her hair, who summons flower petals to attack the opposition on the ground.

In Dark Dawn, Flora is a brown-haired girl wearing a pink-flower themed outfit. She wields a magic wand and magically empowers a group of rose blossoms, which rain down and explode on contact with the enemy.

Flora is among Zagan (Venus), Megaera (Mars), and Moloch (Mercury) as a Summon that is useful as a “placeholder” for more powerful “traditional” summons, in this case for Procne because Flora can be attained and used before one can summon Procne with three Jupiter Djinn. In The Lost Age, however, Flora's summon tablet can be easily missed, as it is not immediately accessible. In Dark Dawn, the player will already have access to Procne by the time they can access the summon tablet. Flora's strategic merit is that it can put each enemy to Sleep, despite being only 2/3rds as powerful as Procne. Once more Djinn are acquired to bring out the stronger traditional summons from Golden Sun, though, Flora quickly becomes underpowered.

Flora was a minor goddess in Roman mythology, and was the deity of flowers and spring. She was also one of several 'fertility goddesses'. The Venus Djinn used to summon her is reminiscent of her influence over plants, just as Venus Adepts may use the Psynergy Growth.

Flora full sequence
Add a photo to this gallery
Retrieved from "https://goldensun.fandom.com/wiki/Flora?oldid=43190"
Community content is available under CC-BY-SA unless otherwise noted.