Frost (known as Cold Snap in Dark Dawn), Tundra, Glacier, Coldforge, and Frostbite are a series of Mercury attack Psynergy featured in both games. It is available to the Water Seer Class series and the Mariner Class series. Hence, Mia and Piers can use this series of Psynergy.

In Dark Dawn, these have been renamed to: Cold Snap, Cold Forge, and Frostbite. Unlike the previous games, that require leveling up, Dark Dawn requires the Ice Queen stone. You learn them all at once. Amiti or Rief are the only characters that may equip it. 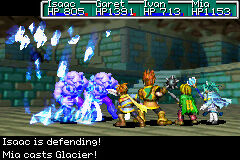 Frost: “Attack with frigid blasts.”: This costs 5 Psynergy Points, has a base power of 20, and has a range of three targets. Some shards of ice are dropped onto the enemy. This is also a Psynergy that can be used in the field; it can be used to freeze tiny puddles of water to make them grow into tall, icy pillars that one can hop onto. It is available at level 2 for Mia and 1 for Piers.

Tundra: “Attack with frigid blasts.”: This costs 8 Psynergy Points, has a base power of 45, and has a range of three targets. More shards of ice are dropped onto the enemy. It is available at level 9 for Mia and 8 for Piers.

Glacier: “Attack with frigid blasts.”: This costs 15 Psynergy Points, has a base power of 100, and has a range of three targets. Many shards of ice are dropped onto the enemy. It is available at level 24 for both Mercury Adepts.

Frostbite: This uses 20 PP. A giant ice sculpture emerges from the ground and explodes. This has a range of three targets, and requires the Ice Queen Stone to use.

Initially, for Mia, Frost is strictly inferior to Ice in battle, in that both are available when she joins and both cost 5 PP, though the latter does more damage. However, due to the large level requirement for Ice Missile, Glacier is probably going to be Mia's strongest multi-target Psynergy in the first game in case you play with her in her mono-elemental class, which makes it quite useful. Piers has a larger pool of offensive Psynergies to choose from overall, and hence it is more up to player preferences as to which of those to use, though Glacier is still going to be the most useful, hence "powerful" muti-target Psynergy for much of the game due to it's availability alone.

Frost as a utility Psynergy[] 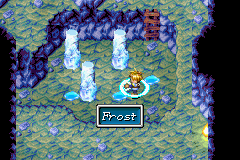 Frost can be used to freeze puddles of water into frozen ice pillars. This is integral to solving many puzzles in both games. In both GBA games, there also exists a Frost Jewel which grants the Psynergy to any character. However, in Dark Dawn, the player needs to obtain the Ice Queen Stone from Harapa Ruins in order to use Cold Snap.

Kraden has reviewed the contents of this article and believes it could do with a bit of expansion (it is a stub). Please oblige him to meet the quality standards of the rest of this tome of knowledge.
Community content is available under CC-BY-SA unless otherwise noted.
Advertisement