Froth, Froth Sphere, and Froth Spiral are a series of Mercury Psynergies featured throughout the Golden Sun series. The Froth Series is believed to be the equivalent of the Thorn Psynergy series. 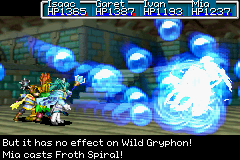 Froth, Froth Sphere, and Froth Spiral are offensive, ranged Psynergies. The total damage inflicted is determined by comparing the caster's Mercury Power to the target's Mercury Resistance and using this number to modify the base power of the particular Psynergy in use.

Froth: "Attack with frothing bubbles": This costs 5 Psynergy Points, has a base power of 28, and has a range of three targets. It is available at level 2.

Froth Sphere: "Attack with frenzied bubbles": This costs 12 Psynergy Points, has a base power of 65, and has a range of five targets. It is available at level 14.

Froth Spiral: "Attack with a bubble vortex": This costs 31 Psynergy Points, has a base power of 150, and has a range of five targets. It is available at level 40.

Visually, each stage of the Froth series features a group of bubbles forming near the caster and striking the targets. Upon impact, the bubbles transform into a blue colored spiral figure. The number of bubbles and spirals increases with each successive stage.

Attacks from each stage of the Froth series take this base damage value and uses it in the following equation:

Therefore, a Froth Spiral cast under these circumstances would deal approximately 225 points of damage to the targeted enemy. Since Froth Spiral is a ranged Psynergy, adjacent targets take a percentage of the total damage, with the percentage decreasing as distance from the main target increases.

The Froth series is available to the Mercury version of the Seer class series, and the Medium class series. Thus, it is available to Mercury, Venus, and Jupiter Adepts. Mercury Adepts generally require large amounts of Venus Djinn to access the series. Non-Mercury Adepts require varying numbers of Mercury Djinn. Both classes learn Froth at Level 2, Froth Sphere at level 14, and Froth Spiral at Level 40.

The Froth series is weaker than many endgame Mercury series, such as the Prism, Ice, and Cool series. However, it is usually available much earlier, when its power is useful. Despite its lower power, it is the strongest series available to both the Seer and the Medium, and is important for inflicting damage should either of those classes be in use. It should be noted that the series is the strongest Power-based Mercury series available to Venus Adepts, barring the use of Item-dependent classes in The Lost Age.

Like many Psynergies available to Isaac and Felix's party, Froth is also used by enemies and monsters. A list of enemies capable of accessing the series follows.