Gaia, Mother Gaia, and Grand Gaia are a series of Venus Psynergy featured throughout the Golden Sun series. This Psynergy series is nearly identical to the Rockfall Psynergy series, available to the Samurai class series, to the point of possessing identical visuals prior to Golden Sun: Dark Dawn. 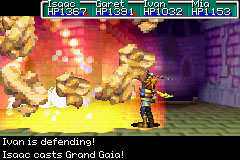 Gaia, Mother Gaia, and Grand Gaia are offensive, ranged Psynergies. The overall power of each stage is determined by comparing the user's Venus Power and the target's Venus Resistance, and multiplying the resultant ratio by the base power of the Psynergy being used.

Gaia: “Attack with the earth’s might.”: This costs 7 Psynergy Points, has a base power of 40, and has a range of three targets. The ground beneath the enemy opens up and engulfs the enemy party in a wide reverse shower of Venus energy and medium-sized boulders. It is available at level 7.

Mother Gaia: “Attack with the earth’s might.”: This costs 17 Psynergy Points, has a base power of 100, and has a range of five targets. The ground beneath the enemy opens up and engulfs the enemy party in a wider reverse shower of Venus energy and medium-large-sized boulders. It is available at level 24.

Grand Gaia: “Attack with the earth’s might.”: This costs 32 Psynergy Points, has a base power of 200, and has a range of five targets. The ground beneath the enemy opens up and engulfs the enemy party in a very large reverse shower of Venus energy and large boulders. It is available at level 54.

Visually, each stage of the Gaia series features the ground opening up directly beneath the enemies, followed by a small beam of Venus energy erupting from the opening. The opening will expand and the enemies will then be engulfed by a reverse shower of Venus energy and boulders that emerges. The size of the reverse shower and boulders increases with each successive stage of the series.

Elemental Power attacks such as Gaia, Mother Gaia, and Grand Gaia use a set base power as the base damage to be modified. For example, the base power of Grand Gaia is 200. Thus, an unmodified Grand Gaia would deal around 200 points of damage.

Attacks from Gaia, Mother Gaia, and Grand Gaia take this base damage value and use it in the following equation:

For example, if an Adept with a Venus Power of 150 casts Grand Gaia on a monster with a Venus Resistance of 50:

Therefore, a Grand Gaia cast under these circumstances would deal approximately 300 points of damage to the main target. Since Grand Gaia is a ranged Psynergy, adjacent targets would take a percentage of the total damage, with the percentage decreasing as the distance from the main target increases.

General: The Gaia series is extremely powerful, with Grand Gaia ranking amongst the most powerful Power-based Psynergies. It is also the latest Psynergy learned, as no character class gains additional Psynergy beyond level 54. For the Squire class, the series is a common endgame Psynergy, alongside Odyssey, due to its power, but can be prohibitively expensive due to the high PP cost. However, the Apprentice class does not have this limit, and thus can make full use of the series. In addition, it is the class's only offensive Venus Psynergy. Another downside is the huge level and power gap between Mother Gaia and Grand Gaia, leaving said Psynergy series outclassed by many offense methods before reaching the rather high level required to learn Grand Gaia.

Golden Sun: Gaia will only see early game use if Isaac is placed in the Apprentice series; by the time he acquires the four Venus Djinn needed to access it in his base class, it would be outclassed. However, Mother Gaia will likely be the strongest Power-based Psynergy available to Isaac, and thus will see endgame use.

Golden Sun: The Lost Age: Like in Golden Sun, Gaia will likely see little early game use due to the Djinn requirements. Mother Gaia is an excellent Psynergy when exploring the Eastern Sea. Grand Gaia will be learned late in the game, but will be powerful. However, Felix and Isaac will need to watch their PP pools, due to the high PP cost.

Golden Sun: Dark Dawn: The series's role is early role is similar to previous games. However, Grand Gaia is no longer the strongest Power-based Venus Psynergy, with this title going to Reigning Dragon, of the Roaring Dragon Psynergy series. Due to the introduction of the Roaring Dragon series, as well as a mage-style Venus Adept, Himi, who can exploit it, it is possible to allow Matthew to forgo the Gaia series is favor of his stronger Attack-based Psynergies. However, it should be noted that the Grand Gaia is cheaper than Reigning Dragon and has a larger range, allowing for more flexibility.

In Greek and Roman mythologies, Gaia (also known as Tellus) was an earth titan and the wife of Ouranos. Her children were Kronos, Rhea, Hyperion, Oceanus, Themis, Crius, Mnemosyne, Iapetus, Tethys, Coeus, Thea, and Phoebe. Gaia was also Palla's grandmother.