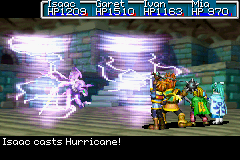 Gale, Typhoon, and Hurricane are a series of Jupiter Psynergies featured in throughout the Golden Sun series. The series is similar in nature to the Whirlwind Psynergy series, and prior to Golden Sun: Dark Dawn, possessed identical visual effects. The first stage of the series, Gale, is also a Utility Psynergy.

Gale, Typhoon, and Hurricane are offensive, ranged Psynergies. The total amount of damage is determined by comparing the user's Jupiter Power to the target's Jupiter Resistance and using this value to modify the base power of the particular Psynergy.

Gale: “Attack with the wind's might.”: This costs 3 Psynergy Points, has a base power of 18, and has a range of three targets. A large whirlwind with minor electric charges spins through the enemy party. Gale is also a Psynergy that can be used in the field. It is available at level 1.

Typhoon: “Attack with the wind's might.”: This costs 13 Psynergy Points, has a base power of 76, and has a range of five targets. Two large whirlwinds with minor electric charges spin through the enemy party. It is available at level 18.

Hurricane: “Attack with the wind's might.”: This costs 25 Psynergy Points, has a base power of 150, and has a range of five targets. Four large whirlwinds with minor electric charges spin through the enemy party. It is available at level 44.

The visual effects of the Gale series vary greatly between games. In Golden Sun and Golden Sun: The Lost Age, the visuals are identical to the Whirlwind series, both featuring purple tornadoes with minor electrical charges that strike the opponents. Like the Whirlwind series, Gale features one tornado, while Typhoon features two and Hurricane four.

In Dark Dawn, a purple scroll forms around the caster, out of which appear purple highlighted characters. Stylized clouds form above the target as a large tornado forms and strikes the opponents. The size of the tornado grows with each successive stage.

Elemental Power attacks such as Gale, Typhoon and Hurricane use a set base power as the base damage to be modified. For example, the base power of Hurricane is 150. Thus an unmodified Hurricane would do around 150 points of damage. 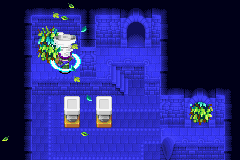 Like Whirlwind, Gale is a Utility Psynergy, and in fact the two can be used interchangeably. In Golden Sun and The Lost Age, Gale can be used in place of Whirlwind to blow away green bushes, and can activate Wind Stones at Air's Rock and Shaman Village. Even if Gale is used on the Wind Stone at Shaman Village, the cutscreen proceeds as though Sheba uses Whirlwind. This gives a bit more freedom as far as class choices during the later portions of the game, as the player no longer needs to keep Ivan or Sheba as a Wind Seer in order to have Whirlwind. In addition, Gale consumes less PP, and thus is more efficient.

In Dark Dawn, Gale's mechanics are slightly altered. Like Whirlwind, it can now be aimed in any direction, and will travel in a straight line for a distance of about six squares. Gale can activate Zol Stones and can push the player back, which is useful for controlling rafts; the player simply shoots Gale in the direction opposite of where they want to travel. It can also be used to activate small fans and arrows to change the surrounding landscape. However, Gale's helpfulness as a Utility Psynergy is rendered somewhat redundant, as Karis has access to Whirlwind regardless of class. However, Gale still costs less than Whirlwind, and can be used by other Adepts, making it useful in situations where conserving Karis' PP is necessary.

Gale, Typhoon, and Hurricane are unique to the Ninja class series. Thus all Venus, Mars, and Jupiter Adepts can access the series. To access the class, Venus Adepts require a combination of Mars and Jupiter Djinn, while Mars Adepts need Jupiter and Venus Djinn. Jupiter Adepts require a specific combination of Mars and Venus Djinn. Gale is learned at Level 1, while Typhoon is learned at Level 18 and Hurricane is available at Level 44.

Each stage of Gale series is both cheaper and weaker than their corresponding stages in the Whirlwind series. However, its usefulness can be limited, due to the existence of the more powerful Thunderclap Psynergy series, which is also available to Ninjas. However, the Gale series is learned earlier than the Thunderclap series, and thus can function as a decent placeholder. In addition, Thunderhead is one of the most expensive Psynergies available. Thus Hurricane may see use in situations where PP conservation is necessary.

Retrieved from "https://goldensun.fandom.com/wiki/Gale_Psynergy_series?oldid=42244"
Community content is available under CC-BY-SA unless otherwise noted.