Golden Sun: The Lost Age (黄金の太陽 失われし時代 Ōgon no Taiyō: Ushinawareshi Toki / Golden Sun: The Lost Age in Japanese) is the second installment of a series of role-playing video games developed by Camelot Software Planning and published by Nintendo. The game was released in June 2002 for Nintendo's Game Boy Advance, being a direct sequel to the Game Boy Advance Golden Sun. Players can transfer their characters and items from Golden Sun to The Lost Age by means of a password system or Game Link Cable, and players are rewarded for fully completing both games.

Picking up the story during the events of the previous game, The Lost Age puts the player into the roles of a magic-attuned "Adept" named Felix and his allies as they seek to restore the power of Alchemy to the world of Weyard. Along the way, the player uses magic to defeat enemies and discover new locations, help out local populations, and find elemental Djinn which augment the character's powers. Upon release, The Lost Age was generally praised, although most publications found that the game was not as good a title as Golden Sun. Nonetheless, the game ranks as the eighth best Game Boy Advance title of 2003 and the 22nd best GBA game of all time.

Golden Sun: The Lost Age takes place on the same fantasy world as its predecessor: The world of "Weyard," a massive earth-like environment modeled off the old Flat Earth idea of the world; it is a flat, vaguely circular plane whose oceans perpetually spill off the edge of the world's entire perimeter into what seems to be an endless abyss, although no one knows what is over it. The plot progression of Golden Sun: The Lost Age spans many continents, islands, and oceans around the two main continents where the previous game takes place. All matter on Weyard consists of any combination of the four base elements: Venus (Essence of rocks and plants), Mars (Heat, fire, and lava), Jupiter (Wind and electricity), and Mercury (Water and ice), magically-attuned Adepts can manipulate these elements.

The Lost Age begins with a prologue summarizing the events of the previous game and explaining all the major plot points. Afterwards, players take the role of Jenna moments before Venus Lighthouse was lit. Alex tells Jenna and Kraden to go to Saturos and Menardi's boat, then he leaves to keep Tolbi's soldiers at bay. Once the three regroup at Idejima, Venus Lighthouse is lit, and the following tremors tears a rift in the mountain range, causing Idejima to drift into the ocean.

Soon, Alex discovers Felix and Sheba washed up on the beach. As Jenna and Kraden try to wake them up, a tidal wave strikes, and Idejima is sent crashing into the continent of Indra. Felix wakes up and gathers Jenna, Sheba, and Kraden, and they go search for Alex.

For more information on the game's storyline, see the Golden Sun: The Lost Age section of the full series plot outline.

For much of the game, the player controls a total of four characters: Felix is an eighteen-year-old Venus Adept from the village of Vale, who was an anti-hero in Golden Sun but serves as the game's new silent protagonist. His younger sister, Jenna, a seventeen-year-old Mars Adept also from Vale, and a fourteen-year-old girl and Jupiter Adept named Sheba, as well as a sharp-witted elderly scholar named Kraden, are all hostages that Felix was forced to take with his now-deceased masters, the Mars Adept warriors Saturos and Menardi that served as the previous game's antagonists. In this game the player takes the role of Felix as he strives to complete Saturos and Menardi's original objective to restore Alchemy to the world of Weyard, and joining them is a Mercury Adept named Piers, a mysterious man whose ship Felix's party uses to explore the world throughout their journey.

Several groups of characters serve as Felix's antagonists in The Lost Age. He is at odds with the heroes of the original Golden Sun, led by the young Venus Adept warrior Isaac, who pursue him across Weyard under the belief that Alchemy would potentially destroy Weyard if unleashed. One of Saturos's original companions, a powerful and enigmatic Mercury Adept named Alex, allies himself with a second pair of powerful and imposing Mars Adept warriors, Menardi's sister Karst and her partner Agatio. They keep the pressure on Felix to ensure he proceeds with his quest as he is supposed to.

The Lost Age received generally positive reviews, but critics were divided on whether the game was better than the original Golden Sun, with most calling it both an improvement and a more hefty challenge. On Metacritic, The Lost Age has an 86% aggregate rating, compared to Golden Sun's 91%. Likewise, Game Rankings gives The Lost Age an 87% overall rating, slightly lower than Golden Sun's 90%. Conversely, The Lost Age was ranked 78 on IGN's Readers Choice Top 100 games ever, higher than its predecessor. It was also rated the 69th best game made on a Nintendo System in Nintendo Power's "Top 200 Games" list.

IGN gave the sequel high marks, noting that even though the game is not a sequel in the traditional literary sense, it was still an excellent game. The Lost Age subsequently became IGN's "Game of the Month" in April 2003. Shane Bettenhausen of Electronic Gaming Monthly argued that though The Lost Age is "not going to win any originality contests (this looks, sounds, and feels nearly identical to its predecessor), but when more of the same means more top-notch roleplaying, I can't complain." Other publications singled out the graphics and audio as particularly strong features.

Some publications found fault with complaints which remained from the original, including the combat system. IGN and GamePro took issue with the lack of "smart" combat; if an enemy is killed before other party members attack it, those members switch to defense instead of intelligently attacking the remaining enemies. Ethan Einhorn of GameNOW felt that the only elements that set the fighting system above "typical RPG fare" were the graphics. GameSpy felt that Camelot could have added more features, and criticized the long opening sequence which either alienated players of the previous games, or confused new players by swamping them with unfamiliar places and characters. 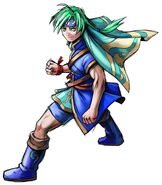 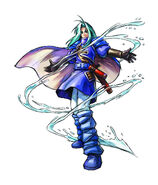 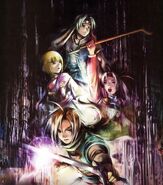 A battle inside Kandorean Temple

Traveling to Aqua Rock in the game's overworld

Eclipse, one of the game's spectacular new summons.
Add a photo to this gallery
Retrieved from "https://goldensun.fandom.com/wiki/Golden_Sun:_The_Lost_Age?oldid=41521"
Community content is available under CC-BY-SA unless otherwise noted.