Goma Plateau is the portion of the Goma mountain range that was upheaved by the Golden Sun event. Isaac chose to build his Lookout Cabin on one of the plateau's outcroppings, allowing him a spectacular view of Mount Aleph to the north through which he keeps an eye on Aleph's remains. It is one of the earliest locations in Golden Sun: Dark Dawn, and in the game it technically begins when the area of Lookout Cabin is exited.

Goma Plateau's map starts with a long bridge that connects the cabin's area from west to the rest of the plateau, where the road forks. Going south leads to the overworld on a linear path to Patcher's Place, while going further east leads to a cave entrance leading to a single, large, cavernous room. Beyond this cave is the path into Tanglewood, which itself leads into the Abandoned Mine; these three areas together function as the game's introductory dungeon-style area. 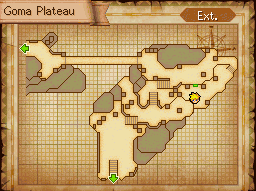