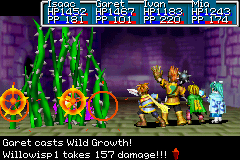 Growth, Mad Growth, and Wild Growth are ranged, Psynergies. The overall power of each stage is determined by comparing the user's Venus Power and the target's Venus Resistance, and multiplying the resultant ratio by the base power of the Psynergy being used.

Growth: “Attack with wild plants.”: This costs 4 Psynergy Points, has a base power of 25 and has a range of one target. A few thorny vines erupt from the ground and through the foe. It is available at level 1 for Brute classes and level 3 for Seer classes. The manual to the North American version of The Lost Age incorrectly names this Psynergy "Grow" in some instances.

Mad Growth: “Attack with ferocious plants.”: This costs 10 Psynergy Points, has a base power of 60, and has a range of three targets. A group of thorny vines erupt from the ground and through the foes for a short time. It is available at level 12 for both Brutes and Seers.

Wild Growth: “Attack with giant plants.”: This costs 19 Psynergy Points, has a base power of 110, and has a range of five targets. A large tangle of thorny vines erupt from the ground and through the foes for an extended time. It is available at level 28 for Brutes and level 29 for Seers.

Visually, each stage of the series resembles a group of thorny vines growing from the ground around the target. The size and number of vines increases with each successive stage.

Elemental Power attacks such as the Growth series use a set base power as the base damage to be modified. For example, the base power of Wild Growth is 110. Thus an unmodified Wild Growth would deal around 110 points of damage.

Wild Growth's attack takes this base damage value and uses it in the following equation:

For example, if an Adept with a Venus Power of 150 casts Wild Growth on a monster with a Venus Resistance of 50:

Therefore, a Wild Growth cast under these circumstances would deal approximately 165 points of damage to the main target. Since Wild Growth is a ranged Psynergy, adjacent targets would take a percentage of the total damage, with the percentage decreasing as the distance from the main target increases. 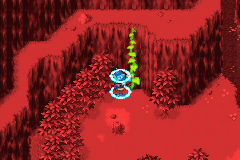 Growth is a Utility Psynergy found in each game in the Golden Sun series. In the first two games, Growth is used uncommonly, to grow small plants into climbable ladders. It's use is generally not required, and in fact the ability to use Growth can be missed, due to the player being required to change classes to access it. Besides its standard use, in The Lost Age, Growth can also allow the player to navigate the maze within Gaia Rock leading to the Serpent, where the player can use Growth on the plants to see which way to go. If not used on a plant, Growth works much like in battle, but as it is deprived of a target, it is effectively useless.

In Dark Dawn, Growth related puzzles are much more common, and the player no longer needs to change classes to use it; Matthew will know Growth regardless of class. Growth can now be used with in a circular range, similarly to Move. In Belinsk Ruins, Growth is used in several puzzles as a representative for the element of Venus.

In a special case, the Venus Adept Matthew will know Growth starting at Level 1, regardless of class. However, he will not learn the other two stages unless in the Brute class.

General: As far as basic series go, the Growth series could be considered the staple area-of-effect Venus Psynergy. Early in the game, it can serve as an effective combat tool, but later in the game, Grand Gaia is generally considered more effective than Wild Growth. However, Wild Growth is obtained almost twice as early as Grand Gaia, level-wise, and can still serve well up until then.

Golden Sun: Dark Dawn: Since Matthew will have access to Growth from Level 1, it is a decent choice for the random encounters in the introductory dungeon, as an equivalent power Psynergy does not come along until Earthquake is learned at Level 4. Even when Matthew borrows Isaac's Djinn, it is still useful, as it allows for conservation of PP in comparison to the more expensive Fireball. However, once the introductory dungeon is completed, Matthew will have leveled up enough to have learned more powerful Psynergies. Afterwards, Matthew will only use Growth for its utility purposes.

Retrieved from "https://goldensun.fandom.com/wiki/Growth_Psynergy_series?oldid=42584"
Community content is available under CC-BY-SA unless otherwise noted.