Guardian (しゅごぼさつ, Guardian Saint) and Protector (しゅごてんじん, Guardian Deity) are a set of Support-class Psynergy aligned with the Mars element featured throughout the Golden Sun series. The Guardian Psynergy series is functionally identical to the Guard Psynergy series, to several Mars-based classes. 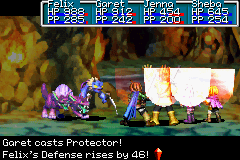 Guardian is a single-target Psynergy, that can be targeted on any currently-battling non-downed member of the party. Protector functions similarly, but affects all non-downed actively battling party members.

Guardian: “Boost Defense with divine might.”: This costs 3 Psynergy Points and affects one party member. Red-white energy gathers into the Adept and a shield image appears above the Adept to signify enhanced defense. The Adept's defense rating is temporarily improved by 25%; in Golden Sun games, a party member's defense can be enhanced up to a maximum of 150% of his or her normal defense rating, so using this twice will cause that Adept to attain 150% defense. It is available at level 3.

Protector: “Boost Defense with divine might.”: This costs 5 Psynergy Points and affects all party members. Red-white energy gathers into all party members and a shield image appears above each party member to signify enhanced defense. All Adepts' defense ratings are improved by 12.5%, so using this four times will cause all Adepts to attain 150% of their normal defense levels temporarily during battle. It is available at level 15.

In Golden Sun and Golden Sun: The Lost Age, the Guardian series is visually identical to the Guard series. Like Guard, Guardian features red spheres of energy gathering into the selected target. A shield then forms in front of the targeted ally, before quickly dissipating to signify an increase in defense. Protector is nearly identical, simply multiplying the effect to show each ally's Defense increasing.

In the Golden Sun series, the maximum amount that an individual's Defense can be raised is 50% above the standard Defense. Thus, Guardian can be used a maximum of two times on one ally, while Protector requires 4 uses to raise the Defense to maximum. Since Guardian and Protector increases Defense by a percentage, the numerical increase is larger for Adepts with higher Defenses. The effects of Guardian and Protector are only temporary, however, repeated re-castings can keep the Defense-bonus from wearing off. The effects of Break can also remove any bonuses from the use of Guardian and/or Protector. Additionally, the Defense increase ends if a party member is downed or is switched out.

Raising Defense is a fairly staple and viable tactic within the RPG genre. Early on, when the player's party has weaker armor and statistics, an increase in Defense can be extremely useful. However, Guardian and Protector are typically available later in a game, due to the high Djinn requirements of the Samurai class. By this point, the player will be strong enough to face most enemies without a Defense increase. The defense multiplying effect however, means this move becomes more valuable as the party progresses, as it buffs the party by a larger absolute value. This can make it useful against bosses that have high attack ratings, though it depends heavily on the situation.

Guardian and Protector can be useful in boss battles. In Golden Sun and The Lost Age, however, most bosses can cast the Break Psynergy, and since the Defense bonus is temporary, it is quite possible to have the effect wear off before the enemy attacks the buffed adept, effectively wasting a turn and PP. In addition, some bosses rely on Power-based offenses, which are unaffected by an increase in Defense. In Dark Dawn, however, most bosses cannot cast Break. Thus, there are a few cases where Guardian and Protector are useful. One example is the Ogre Titans, which use only physical attacks. Since this battle is drawn out, castings of Guardian and Protector are useful in reducing damage over time.