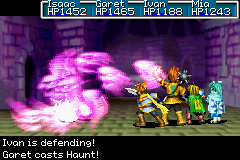 Haunt is a Venus-based support Psynergy found throughout the Golden Sun series.

Haunt is a ranged, non-offensive Psynergy that may alter the target's status. Haunt's chance successfully inflicting a status change changes depending on the Luck statistic of the target(s).

Visually, Haunt features a group of purple, skull-like spirits emerging from the ground and entering the target. If successful, a spirit will circle above the head of the affected target.

Haunt is a status-altering Psynergy that may instantly inflict the Haunt status on a target. Like all status-changing Psynergies, the rate of success is related to the Luck of the target. Lower Luck levels result in a higher rate of success. Haunt's effect causes the user to become possessed. After each action a possessed target takes, there is a chance that the haunted target will take a random amount of damage. In-battle, the Haunt status can only be removed by Djinn, like Tonic or Salt, which have the ability to heal all status-effects. Otherwise, Haunt's effect will remain after a battle has ended and can only be removed at a Sanctum.

Haunt, while seemingly a useful Psynergy, has drawbacks in its inconsistency. Each action has only a chance of triggering Haunt's effect, and the amounts of damage are random. In addition, the reliance on low Luck levels for a successful casting means that Haunt will be of little help against bosses; common enemies are too weak for Haunt to be of any use.

Haunt will be seen more when it affects the player's party. In this situation, Haunt can be dangerous since it lingers after battles and is difficult to remove. Should a player be in a situation where Haunt cannot be removed, it can do large amounts of damage to the affected Adept.