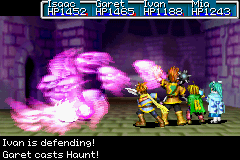 Haunt is a Venus based Psynergy found in both games of the Golden Sun series. It is available to the Apprentice and Medium class series in the first game, meaning that all Adepts, except for Garet, have access to it. The second game adds the Dark Mage class series to the list, making it available to any Adept. The standard level for learning Haunt is 17, it costs 5, has a range of 3 PP and is used to attempt to haunt the foe.

The effects of haunt are inconsistent, causing damage randomly. The low chance of its effect taking hold decreases its usefulness further. When used by an enemy, however, the fact that haunt's effects are difficult to remove (only Salt and Tonic can remove it in battle) greatly incrases its efficacy.

Kraden has reviewed the contents of this article and believes it could do with a bit of expansion (it is a stub). Please oblige him to meet the quality standards of the rest of this tome of knowledge.
Retrieved from "https://goldensun.fandom.com/wiki/Haunt_(Psynergy)?oldid=20234"
Community content is available under CC-BY-SA unless otherwise noted.