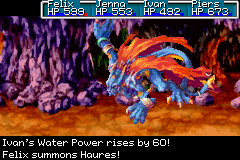 Haures is a Summon of the Venus element first appearing in Golden Sun: The Lost Age. Haures is one of fourteen summons that is not automatically available once the required Djinn are collected, but must be specifically acquired from a stone tablet containing the summon.

For a successful summoning of Haures, the player must have 3 Venus Djinn and 2 Mars Djinn are on standby. Haures has a base Venus power of 270 and also does additional damage equivalent to 15% of the enemy’s maximum HP. In addition, each enemy affected may be infected with Venom. The Ancient Devil, a bonus boss that can be fought after collecting the Sol Blade, has the ability to summon Haures at will.

Haures full sequence
Add a photo to this gallery
Retrieved from "https://goldensun.fandom.com/wiki/Haures?oldid=42743"
Community content is available under CC-BY-SA unless otherwise noted.