The Impact Psynergy series is a Jupiter class Support Psynergy found in all 3 games. The series is available to the following classes and their stronger variants: 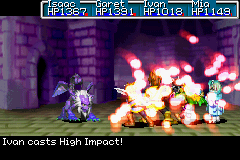 In perfect gameplay, this can become really useful, since there will be a moment when the unleashes of the weapons will become so powerful (normally multiplying damage by x3) or even with Psynergy based on attack stats (such as Call Dullahan) that boosting the attack stat will be a great way to augment your Adepts' strength. It all depends on your strategy. It is also important to know that there is an identical Psynergy accessible only to the Samurai class, the Demon Spear Psynergy series.

Impact is used to "Boost [an] ally's Attack." Specifically it raises one Adept's Attack by 25%, and can be used again to increase it to 50% (the maximum any stat can be raised above its standard value). While the Hermit class series learns Impact at level 1, the rest need to wait until at least level 5, with the Tamer class series learning it the latest at level 6. It costs 7 PP.

High Impact is used to "Boost [the] party's Attack" by 12.5%. It can be used repeatedly to further increase the party's attack, up to 50% higher than its starting value. It costs 12 PP.

A fairly staple move within the RPG genre, raising your own attack can be a valuable tactic. However, most bosses can cast the Break Psynergy, and it only lasts for a short period of time, meaning that to make it useful, the increase in damage dealt before it wears off must exceed the damage that could be done through attacking normally. However, due to the attack multiplying effect, this becomes more valuable as the party progresses, both by buffing the party by a larger absolute value, and by increasing the base damage to be multiplied when using moves such as the aforementioned Call Dullahan Psynergy. This, along with the low PP cost, make this Psynergy series a highly practical one.