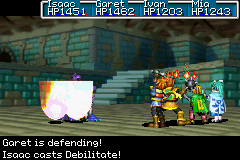 Impair and Debilitate make up a Mars Support Psynergy series featured throughout the Golden Sun series.

Impair is a single-target Psynergy that targets a single enemy. Debilitate functions similarly, but affects all potential targets.

Impair is available to the Guard and Savage at level 9 while Flame User learns it at level 10. It costs 4 PP and is used to drop the Defense of 1 enemy by 25%, and can be used again to lower it to 50%. The manual to the North American version of The Lost Age, in one instance, incorrectly refers to this Psynergy as "Weaken", which is a different Psynergy of the Jupiter element that lowers Resistance.

Debilitate is available to the Savage and Flame User at level 23 while the Guard must wait until level 26. It costs 6 PP and is used to drop the Defense of up to three enemies by 12.5% and can be used repeatedly, up until 50%.

Visually, Impair features a red shield forming in front of the target. The shield then shatters to indicate the drop in Defense. Debilitate is nearly identical, with the effect simply being shown for every member of the affected party.

In the Golden Sun series, a statistic can be decreased in-battle by a maximum of 50%. Thus, Impair can be successfully used a maximum of twice on a chosen target. Debilitate has a smaller reduction, 12.5%, but affects the entire party. Thus, Debilitate can be successfully used a maximum of 4 times on a single party. In either case, the Defense reduction will only last for a limited amount of time, and can be countered by using an effect that increases Defense.

The Impair series is available to the Flame User class series, the Guard class series, specifically the stages of Warrior and higher, and the Brute class series, specifically the stages of Savage and higher. The Flame user class is the base class of Jenna, while the Guard class serves as the base class for both Garet and Tyrell. Jenna can access the series when she has no or only Mars Djinn set, while Garet and Tyrell need four Mars Djinn set to access the series. In addition, they, alongside the Mars Adept Eoleo, and the Venus Adepts Isaac, Felix, and Matthew, can access the class by equipping four of the specific Adept's symbiotic element, placing them in the Savage stage of the Brute class.

Lowering Defense is a staple move within the RPG genre, and can be a valuable asset to the player's offense, especially since it does work on most bosses. However, the effects of Impair and Debilitate only last for a short period of time, meaning that to make it useful, the increase in damage dealt before it wears off must exceed the damage that could be done through attacking normally. Due to the high attack and low PP of the Brute and Guard series, it may be more efficient to simply attack or use a damaging Psynergy. Because of this, while it won't be used all the time, it remains useful in certain situations.