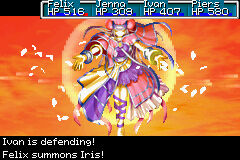 "Goddess of rainbows, guide of souls."

Iris is a Summon of the Mars element first appearing in Golden Sun: The Lost Age. and Golden Sun: Dark Dawn. It is one of fourteen summons that is not automatically available when the required Djinn are assembled, but must instead be specifically acquired from a Stone Tablet. It is the ultimate Mars summon and is widely considered the ultimate move – Psynergy, Summon, Weapon Unleash, Monster Skill, and otherwise.

Before Iris can be summoned, the player must first collect the summon from a Summon Tablet. In order to access the tablet, the player must first defeat Dullahan, widely considered to be the most powerful boss in the series. In The Lost Age, Iris's tablet is found at the end of Anemos Inner Sanctum. Access to the Sanctum is only granted after the player has collected all 72 available Djinn. In Dark Dawn, the summon tablet is found at the end of Crossbone Isle.

To summon Iris, the player must have 9 Mars Djinn and 4 Mercury Djinn on Standby. Iris has an incredible base Mars power of 800 and also does additional damage equivalent to 40% of the enemy’s maximum HP. In addition, all 8 Adepts are revived at 100% HP. Afterwards, the summoner's Mars and Mercury Power will rise by 100 points each.

In both its appearances, Iris's summon sequence features a matriarchal goddess garbed in a divinely textured array of clothing summon up the battle’s foes and project them into outer space, where they are sent into the blaze of the Sun itself. Afterward, all eight Adepts will be healed. In The Lost Age, this is represented by a collection of red sparks entering the battling party (akin to the Cool Aura psynergy). In Dark Dawn, a collection of golden feathers will rain down on the party.

Iris is undoubtedly the game’s ultimate Summon and is certainly the game's strongest Mars-based attack, much stronger than even Charon. The extreme Djinn requirement, along with the lack of bosses to fight in The Lost Age and Dark Dawn at the point in time Iris would be attained, means that there is scarcely an opportunity for Iris to be put to very practical use as its only real use is as a "trump card" from when the team is failing badly (with the exception of battle mode in The Lost Age); Iris is more meant as a “bragging rights” summon for players who have conquered The Lost Age's ultimate challenge in Anemos Sanctum, and in Crossbone Isle in Dark Dawn. Actual uses of the summon are mainly for show. The power of the attack as well as the amazing regenerative effect on the whole party may make it a very useful summon to use in the later stages of the final boss battles, provided the player goes into the battle with summoning Iris set as a clear objective.

Iris in Greek mythology was the personification of the rainbow and was the messenger of the goddess Hera, who was the queen of the gods. The Mars and Mercury Djinn as the Djinn used to summon her are well-placed, as the rainbow only appears when the Sun (Mars) breaks through the clouds after a rainstorm (Mercury).

Another goddess in Egyptian mythology that may have influenced the summon is Isis. In many accounts, Isis revived her husband Osiris from death, after he had been murdered by Seth. Coupled with the fact that she was considered the protector of the dead, this may be a reference for Iris' ability to revive party members.